Former US president Donald Trump has left the White House. Rather than attend the inauguration of his successor Joe Biden he has chosen to travel to Florida with his wife Melania. Video: Reuters/CNBC 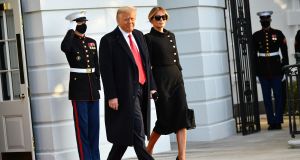 US president Donald Trump and first lady Melania make their way to board Marine One before departing from the South Lawn of the White House on Wednesday. Photograph: Mandel Ngan/AFP via Getty

Former president Donald Trump vowed to return “in some form” as he left the White House for the final time as president on Wednesday.

Speaking to journalists as he boarded the Marine One helicopter, Mr Trump said: “We’ve had an amazing four years. I just want to say goodbye, but hopefully it’s not a long-term goodbye, we’ll see each other again,” he said.

He then made the short trip by helicopter to the military airport at Joint Base Andrews, boarding Air Force One for the last time to fly to Florida.

“I wish the new administration great luck and great success,” he said, without mentioning his successor Mr Biden by name, adding “They have the foundation to do something really spectacular.”

“Goodbye, we love you, we’re going to be back in some form,” he said to cheers, before thanking his vice-president of four years, Mike Pence.

He then entered the doors of Air Force One with his wife Melania to the tune of YMCA while Frank Sinatra’s My Way also played in the background.

Mr Trump was accompanied on his flight by members of his family, including his eldest son Donald jnr and his girlfriend Kimberley Guilfoyle, his son Eric and his wife Lara, and Mr Trump’s daughter Tiffany.

Mr Trump became the first president in 152 years not to attend his successor’s inauguration, skipping the ceremony at the US Capitol. The last outgoing president to miss an inauguration was Andrew Johnson, who was also impeached and was a one-term president.

Though Mr Trump in recent days accepted that Mr Biden would be sworn in as president, he never accepted the result of the November 3rd election, which was decisively won by Mr Biden.

He did, however, leave his successor the traditional note in the White House, the content of which is unknown.

While Mr Trump’s absence at the inauguration was notable, outgoing vice-president Mr Pence and his wife Karen did attend, as well as several Republican leaders in Congress including Senate minority leader Mitch McConnell and the top Republican in the House of Representatives, Kevin McCarthy.

Mr McConnell and Mr McCarthy also attended a Mass earlier in the day with the Biden family at St Matthew’s Cathedral.

Mr Trump departed Washington hours after issuing 143 pardons, including to Steve Bannon, his former adviser who was one of the architects of his 2016 presidential election victory. Mr Bannon had been charged with illegally raising money for an organisation set up to protect the president’s border wall project.

Although Mr Trump had fallen out with Mr Bannon after he left the White House, he had renewed contact with him in recent months.

Other high-profile recipients of clemency from the president in his final hours of office included rappers Lil Wayne, who had been charged with gun crimes, and Kodak Black, who faced gun and sexual misconduct charges.

Despite speculation that Mr Trump was considering issuing pardons to his family members, he did not do so. Similarly, he did not pardon himself, an unprecedented move by a president, and one had never been tested in court.

Mr Trump will be the first former president ever to face an impeachment trial after he has left office. The US House of Representatives voted to impeach him last week over his role in inciting the January 6th Capitol Hill riot. It is now expected that House speaker Nancy Pelosi may send the article of impeachment against Mr Trump to the Senate next week, paving the way for a trial.

In his strongest comments yet on the events, outgoing Senate majority leader Mitch McConnell on Monday explicitly accused Mr Trump of provoking the mob that descended on the Capitol.

“The mob was fed lies,” he said, referring to Mr Trump’s erroneous claims that he had won the election.