Navalny, energy and Ukraine among many areas of friction, but arms pact deal achievable 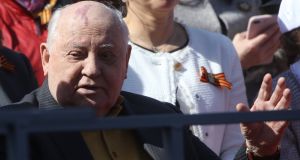 Mikhail Gorbachev, the last leader of the Soviet Union, has urged incoming US president Joe Biden to repair relations between Washington and Moscow and extend their last remaining nuclear arms control pact before it expires next month.

Talks on the so-called New Start treaty – which limits the number of missiles, bombers and nuclear warheads that the US and Russia can deploy – are expected to be high on the agenda for Mr Biden’s foreign policy and defence teams.

With both sides keen to extend the 2010 deal, it could offer an early chance for agreement between Mr Biden’s White House and Kremlin before they tackle more divisive issues such as the war in Ukraine, Russia’s Nord Stream 2 gas pipeline to Germany, and the fate of jailed Russian opposition figure Alexei Navalny.

“The state of relations between Russia and the US now causes great concern. Unfortunately, that’s the reality. But it means that something must be done to normalise relations . . . We cannot fence ourselves off from each other,” Mr Gorbachev (89) said ahead of Mr Biden’s inauguration on Wednesday.

“It’s essential to extend the New Start treaty, and it’s possible, particularly because Biden called for that during his election campaign,” he told Russia’s Tass news agency.

Kremlin spokesman Dmitry Peskov said Russian president Vladimir Putin wanted to preserve the accord, and “so if our American colleagues do indeed show the political will to keep this pact by extending it, this can only be welcomed.”

Despite Russia’s hopes for warmer ties with the US under Donald Trump, and his calls for a rapprochement with Moscow, relations continued to deteriorate in areas including arms control; both countries withdrew from the 1987 Intermediate-Range Nuclear Forces Treaty in 2019, and subsequently quit the Open Skies Treaty that sanctioned surveillance flights over military facilities to help build trust.

Mr Biden’s choice for secretary of state, Antony Blinken, has said the new US administration does want to extend New Start.

He was far more combative on the case of Mr Navalny, who was nearly killed by a nerve agent in Siberia last August and was thrown into jail on his return to Russia this week.

Mr Blinken said the issue would be “very high on the agenda for an incoming administration” and that it was “extraordinary how frightened Vladimir Putin seems to be of one man”.

With the US also at loggerheads with Russia over its politically sensitive Nord Stream 2 gas pipeline and over conflicts in Ukraine and elsewhere, the Kremlin does not have high hopes for the Biden presidency.

“Russia, as for many hundreds of years, will live in the same way, seeking good relations with the US,” said Mr Peskov. “Whether there will be the appropriate political will in return depends on Mr Biden and his team.”