US Politics: Democratic candidate knows that voters prioritise the economy and healthcare over all else 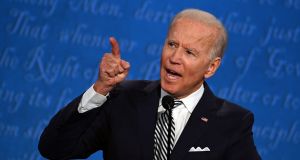 Joe Biden speaks during the first debate of the 2020 US presidential election in Cleveland, Ohio, on Tuesday. Photograph: Jim Watson/AFP via Getty Images

Nothing dates a period as much as the quaintness of its scandals. In 1987, the unattributed use of some rhetoric from a British politician was enough to scuttle Joe Biden’s first bid for the White House. Looking back, only the content, not the fact, of what we might call this intellectual-property breach was interesting.

The “first in his family to get to a university” was playing the everyman against a gilded US president. Class was his theme in a country that sometimes purports to transcend such things.

Swap Donald Trump for George HW Bush, and Biden is resuming the unfinished business of 33 years ago. There is awesome pressure on the Democrat to engage with the cultural schisms of the day: over race, policing, free speech and what it means to be male or female.

President Trump tried to lure him on to some of this fraught terrain in Cleveland, Ohio, where the two men “debated” on Tuesday. But Biden dwelt on another kind of divide. He referred (when the president took breaths between interruptions) to “millionaires and billionaires like him”. Trump, he said, only encountered suburban life when he “took a wrong turn”. He and those around him “look down on people who don’t have money”.

If Biden wins the presidential election in November, his campaign will be studied as a clinic in message-discipline. He has skirted – as far as anyone ever can in the US – the culture war. But he dives with some relish into the nation’s economic fissure. Asked about Amy Coney Barrett, Trump’s nominee to the supreme court, Biden flagged the threat to the Affordable Care Act before the precariousness of abortion rights.

He has what might be the most redistributive platform of any candidate with a good chance of winning since the 1960s. He released his own tax returns before the debate to contrast with the president’s recently leaked ones. No gesture so vivid, or policy so bold, has been forthcoming on matters of culture.

Even the most humanising part of this life-long politico’s story, his experience of bereavement, is seldom aired. That would veer from the central themes of economic and health security. This can make for a dry candidacy. My profession is sometimes piqued by Biden’s frankly impertinent refusal to run the kind of campaign we want. How strange that he has been leading primary and then national polls for most of the past two years.

He has maintained this focus on material issues during America’s most culturally febrile period for half a century. The police killing of George Floyd, the nationwide protests, the death of the feminist jurist Ruth Bader Ginsburg: few candidates have ever had more cause to ground their campaign in matters of identity.

Sure enough, Biden was clear in the debate that racial inequities mar the US. But he is also apprised of the polls and the focus groups. He knows that voters prioritise the economy and healthcare over all else (the coronavirus pandemic is bound up with each one).

That includes the ever darker question of the election’s integrity. For liberals who follow politics, Trump’s most self-damning debate moment was his circumlocution over whether he would accept defeat. But for the average voter, to whom stories of electoral chicanery might seem like so much process, the president’s most telling solecism was probably something else. People of means seek tax-efficiency, he said, “unless they’re stupid”. If Biden cannot make populist hay out of that, he should not be in the politics game.

The evidence of the past six months suggests that he will. In avoiding the Kulturkampf, Biden has good advisers on his side, yes, but also age. He can remember when centre-left views on economic management did not imply anything about one’s cultural instincts. Until it dissolved in the 1960s, the Democrats’ New Deal coalition encompassed some of the most reactionary forces in the land.

In time, population trends – the rise of young voters, of ethnic minorities – might allow the left to pair liberalism with social democracy without much compromise. But even if demography were destiny (not all minorities think alike) it will not kick in for a while. To win in five weeks’ time, Biden has to persuade Midwesterners who mistrust his party’s values that he is better for their tangible livelihoods. He went some way to that goal on Tuesday.

That America is painfully riven was obvious enough from this execrable debate. The point, for a vote-seeker, is to choose the right rift. A stab at class politics in a televised debate once helped to sink Biden. The same trick, a generation later, seems riper for these times. – Copyright The Financial Times Limited 2020