Trump has politicised Covid-19 in the absence of traditional campaigning 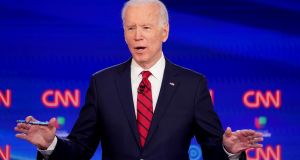 As the coronavirus outbreak consumes attention in the US, it is impacting on what should be the biggest political story of the year. In just over six months’ time Americans are due to go to the polls, four years after Donald Trump swept to victory in 2016.

Covid-19 has already disrupted the timetable of the primary process. Next Tuesday a clutch of states, including New York and New Jersey, were scheduled to hold primaries. As has happened in other states, these have now been postponed.

Democratic sources say the aim was to pair the two conventions, so in the event the Republican gathering is cancelled, so too will the Democratic one – “the idea of allowing Donald Trump to have a whole week of coverage when we have to cancel was just not an option”, said one Democratic operative.

Signs that Trump is entering campaign mode have abounded in recent weeks. His increasingly combative and rambling coronavirus press briefings are reminiscent of his campaign rallies, as he lurches from subject to subject and hits out at perceived enemies.

Trump’s instinct to blame the “other” that helped rouse crowds in 2016 has resurfaced, with China, the media and the World Health Organisation (WHO) functioning as scapegoats.

Indications that Trump is viewing the coronavirus crisis through the lens of November’s election was evident in his decision to weigh in on the anti-lockdown protests taking place across the nation. Though relatively small, the demonstrations are indicative of growing calls on the right to lift restrictions, a position promoted by conservative media outlets such as Fox News.

Always alert to the instinct of his supporters, Trump called for the “liberation” of Michigan, Minnesota and Virginia on Twitter, adding in for good measure a reference to the extraneous issue of gun ownership in Virginia following the introduction of new gun regulations by the state’s Democratic governor – a highly emotive issue for many Republicans.

His executive order on immigration also suggests that his coronavirus policy is being formed with an eye to November’s election. On Monday, the president tweeted that he was suspending immigration into the United States to “protect the jobs of our GREAT American citizens”.

The order that was ultimately signed was in fact much narrower, applying only to new green card applicants, suggesting that the announcement was more a political ploy than a serious policy change. However, a clause promising to “review guest worker programmes” is a sign that further anti-immigration measures and rhetoric may be on the way.

The president’s politicisation of coronavirus in the absence of traditional election campaigning may be a sign of some unease in the Trump camp. The initial bump in ratings he enjoyed in the early stage of the crisis has subsided, with his approval ratings now below 45 per cent in several polls.

In particular a Fox News poll on Thursday suggested that Trump’s rival Joe Biden is leading in battleground states like Michigan and Pennsylvania that could hold the key to victory in November.

As for Biden, the former vice-president has been holed up in his Delaware home since the coronavirus hit. While his attempts to break through the wall-to-wall Covid-19 coverage and Trump briefings have had limited results – his online campaign events have failed to make an impact – his low profile may be strategic as Democrats allow Trump to draw attention to his own leadership failings during the daily press conferences.

It has been a good few weeks for Biden, who picked up the endorsements of former president Barack Obama, and former rivals senators Bernie Sanders and Elizabeth Warren.

Nonetheless there are challenges for the presumed Democratic nominee. The cessation of face-to-face campaigning may negatively impact Biden who tends to connect with voters in townhall-type events. He also faces an enormous challenge in the digital and fundraising space despite a bump in donations this month.

Trump has amassed a multi-million dollar war chest over the past three years, and is ahead of the game when it comes to using that money effectively on social media platforms – a key advantage in an election year when traditional campaigning has been suspended.

1 Coronavirus: Parents of new babies to get three extra weeks’ leave
2 Covid-19: 200 to 250 people arriving in Ireland from US daily - Coveney
3 US passengers fly into Dublin: ‘I’m here for six days. I guess I’ll have to stay inside’
4 People with foreign accents should not be ‘assumed’ tourists - NPHET
5 Maureen Dowd: Biden has his limitations but he’s no Trump
Real news has value SUBSCRIBE