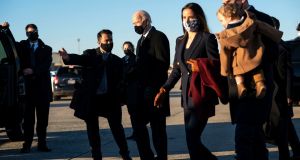 President-elect Joe Biden touched down in Washington DC on Tuesday, ahead of his inauguration on Wednesday as the 46th president of the United States.

The incoming president and his wife Jill attended a ceremony of lights at the Lincoln Memorial to honour the thousands of Americans who have died from Covid-19.

After four years of Donald Trump’s presidency, Mr Biden has promised to unify a country that remains shaken after the attack on the US Capitol on January 6th. On Wednesday, Mr Biden will be sworn-in at the same building that was stormed by a mob of Trump supporters two weeks ago.

In remarks before he left Delaware on Tuesday, Mr Biden reflected on his “improbable story” that brought him to the White House.

Growing emotional, he referenced James Joyce’s quote that Dublin would be written on his heart when he died. “Well, excuse the emotion, but when I die, Delaware will be written on my heart,” he said.

Mr Trump will become the first outgoing president in modern times not to attend his successor’s inauguration. Instead he will hold an early-morning reception at Joint Base Andrews where Air Force One is based, before flying to Florida.

In a “farewell address”, he said that the “movement we started is only just beginning”. He was also expected to issue a flurry of pardons in the final hours of his presidency.

Washington remained under heavy security on the eve of the inauguration. The Pentagon confirmed that it had removed a dozen National Guard troops from duty after vetting by the FBI.

In contrast to the crowds that usually flock to Washington to witness a presidential inauguration, the downtown area is off limits to the public, due to this month’s attacks and concerns about the coronavirus pandemic.

Instead, the Biden team has assembled a “field of flags” along the National Mall, representing the people who cannot be present on inauguration day. On Wednesday morning, Mr Biden will attend mass at St Matthew’s Cathedral, where the funeral of another Irish-American, John F Kennedy, took place.