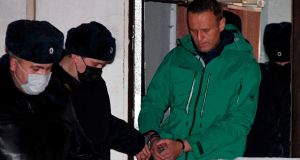 Opposition leader Alexei Navalny is escorted out of a police station in Khimki, outside Moscow, following the court ruling that ordered him to be jailed for 30 days. Photograph: Alexander Nemenov/AFP via Getty Images

The Kremlin has said it has nothing to fear from jailed critic Alexei Navalny or his calls for nationwide street protests, as the anti-corruption campaigner accused Russian president Vladimir Putin of secretly building a vast €1 billion palace on the country’s Black Sea coast.

Mr Navalny was arrested and remanded in custody until mid-February after arriving in Russia on Sunday from Germany, where he spent five months recovering from a near-fatal poisoning in Siberia that he believes was ordered by the Kremlin.

He says the attack, with a Novichok nerve agent, and several legal cases lodged against him and his allies are attempts by Russia’s ruling elite to halt his investigations into alleged graft on a huge scale by Mr Putin and his associates.

In a new report and video released on Tuesday, Mr Navalny’s anti-corruption foundation revealed details of a lavish palace allegedly built for Mr Putin on grounds 39 times the size of Monaco, which overlooks the Black Sea and includes its own theatre, casino, underground ice rink and Russian Orthodox church.

Kremlin spokesman Dmitry Peskov dismissed Mr Navalny’s accusations, and said that Mr Putin had nothing to fear from the campaigner and played no role in his arrest for allegedly breaching the terms of a 2014 suspended sentence.

“Since we’re talking about a Russian citizen, allegations that he did not comply with legal rules have no connection to the Russian president... And various claims that someone is scared of someone else are total nonsense,” Mr Peskov said.

While denying that street protests could unnerve Mr Putin, Russia’s leader of 20 years, Mr Peskov said Mr Navalny’s calls nationwide rallies on Saturday were “worrying” and could be seen as an incitement to do “something illegal”.

Russia’s refusal to investigate the poisoning, and its jailing of Mr Navalny after a quick-fire hearing in a makeshift courtroom on Monday, drew sharp criticism from the United States and EU countries, some of which said Mr Putin’s regime could now face fresh sanctions.

“In this case, we cannot and do not intend to pay attention” to western opinion, Mr Peskov said.

“This is an absolutely domestic matter. We will not let anyone interfere in it and do not intend to listen to such statements. At the same time, we are still interested in good relations, which are in no way linked to any individual citizen.”

A policeman in the city of Samara has reportedly been arrested on suspicion of leaking travel data about Russian security service officers that the Bellingcat investigative group used to link them to the poisoning of Mr Navalny.

Mr Putin, who denies state involvement in the attack, was shown on Tuesday bathing in frigid water before an ice crucifix for the Russian Orthodox holiday of Epiphany.

Kira Yarmysh, Mr Navalny’s spokeswoman, said: “Alexei wanted to release this video only after he had returned to Russia, so the main hero of the investigation would not think that he was scared of him. We are not scared.”