James Murdoch resigns from board of News Corporation 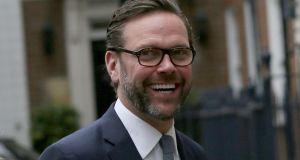 James Murdoch has resigned from the board of News Corp, the media giant said on Friday, citing “disagreements” over editorial content.

In a letter of resignation filed on Friday afternoon, Murdoch wrote: “My resignation is due to disagreements over certain editorial content published by the company’s news outlets and certain other strategic decisions.”

A filing to the US Securities and Exchange Commission said: “On 31 July 2020, News Corporation received a letter from James R Murdoch tendering his resignation from the company’s board of directors, effective immediately.

“Mr Murdoch informed the company that his resignation was due to disagreements over certain editorial content published by the company’s news outlets and certain other strategic decisions.”

The nature of the disagreements or the news outlets in question were not disclosed. James Murdoch is the fourth child of Rupert Murdoch, the billionaire founder of News Corporation, which covers media outlets around the world including the Sun, the Times and the Sunday Times as well as Harper Collins Publishers in the UK.

News Corporation also owns the New York Post in the US and the Dow Jones brand, which includes financial brand the Wall Street Journal. The Australian arm of the company further owns a number of local and national papers and broadcasters. Outside of News Corporation, the 89-year-old media mogul also owns 20th Century Fox and the Fox network. – Guardian News and Media 2020, PA