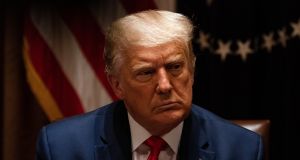 US president Donald Trump defended his decision to send federal agents to American cities, describing protesters as “anarchists”, as he sought to highlight his support among the policing community on Friday.

At a White House event for the National Association of Police Organisations – one of the few unions to have endorsed Mr Trump ahead of November’s presidential election – the president said violent crime had surged in certain Democrat-run cities.

“I actually think they’re afraid of these people [the protesters],” Mr Trump said of city mayors, saying that in some cases mayors were too afraid to ask for federal help.

Federal agents began to withdraw from Portland, Oregon, this week. The city has seen nightly protests for two months since the death of African-American man George Floyd in police custody. Some officers remain on deployment in the city, however, and Mr Trump warned that they would use “strong offensive force,” if necessary.

“If it doesn’t clean up we’re going to do something very powerful ... we have no choice,” he said, as he accused “radical anarchists” of causing violence in the city.

He said that police officers were being assaulted by petrol bombs, cans of soup and other missiles.

Mr Trump also alleged that his Democratic opponent for president, Joe Biden, had been brought “further to the left of where Bernie was”, a reference to former presidential hopeful Bernie Sanders. He falsely accused the former vice-president of wanting to defund police organisations – a position rejected by Mr Biden.

Mr Trump, who was due to travel to Florida later on Friday to meet police sheriffs in Tampa, has been keen to highlight his law-and-order credentials as anti-racism protests continue across the US.

With the US election three months away, polls show Mr Trump badly trailing Mr Biden, both nationally and in key swing states such as Michigan, Wisconsin and Pennsylvania.

Mr Trump also stepped up his criticism of mail-in voting yesterday, a day after suggesting November’s presidential election should be delayed, citing unsubstantiated claims about the reliability of postal voting.

“Everyone knows mail-in ballots are a disaster,” Mr Trump said during the meeting with police union chiefs.

“Take a look at New York city – they’re still counting the ballots there,” he said, a reference to the recent primary races in the state. He also claimed, without evidence, that there were ballots missing in New York.

He said the results of the presidential election may not be known for days or weeks. “Maybe you’ll never get a result ... It’ll be fixed, it’ll be rigged,” he said.

“This is going to be the greatest election disaster in history,” he added, claiming that Russia and China would forge votes.

An Ipsos/Reuters poll released on Friday found that 80 per cent of registered Republicans were concerned that an increase in voting by mail would lead to widespread fraud in the November 3rd election.

Mr Trump also expressed confidence he would be re-elected, citing his own campaign’s internal polling. “We’re going to do very well in the election, nobody wants that election more than me,” he said.

Referring to ongoing negotiations on Capitol Hill between Republicans and Democrats on a coronavirus stimulus package, he said Democrats “do not care about the people of our country.

“All they care about is the election, and they’re going to lose the election. The people get it.”

Asked about former president Barack Obama’s comments at the funeral of civil rights leader John Lewis alleging that voters’ rights were being suppressed, Mr Trump said he had done “a much better job” for minorities than his predecessor.