Grouping of countries looking east called ‘axis of the sanctioned’ 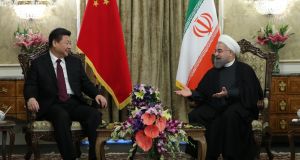 The Trump administration’s “maximum pressure” campaign involving the imposition of punitive sanctions on Iran and Syria has backfired by driving both countries into the arms of US-sanctioned China.

Their “pivot to the east” has produced a grouping dubbed the “axis of the sanctioned”. The aims of the axis are to defy and resist US pressure.

China also seeks to proceed with its Belt and Road project to revive ancient east-west “silk road” trade routes giving China direct access to the Mediterranean and Europe. Iran is the keystone of this overarching project.

Tehran accuses the US and its ally Israel of adding sabotage to sanctions by targeting sensitive Iranian sites, including the Nantaz nuclear research centre, a power station and a shipyard.

Last week a US fighter jet buzzed an Iranian commercial airliner bound for Damascus, forcing it to swerve abruptly while in Syrian airspace.

Iran’s president Hassan Rouhani recently signed a roadmap for a 25-year partnership with China, and talks to finalise the deal continue. Negotiations began in 2016 following a visit to Tehran by Chinese president Xi Jinping during the global reopening to Iran following the 2015 signing of the agreement lifting sanctions in exchange for limitations on Iran’s nuclear programme.

Talks accelerated in 2018 after the Trump administration withdrew from the nuclear deal. While details of the partnership have not been revealed, China is expected to invest in transport, healthcare, energy, tourism and communications, while Iran will grant China discounts on oil and first refusal on petrochemical projects.

China reportedly demands the deployment of 5,000 Chinese personnel to protect its projects.

While rebuffing the US, the partnership exerts pressure on the EU to distance itself from the Trump administration’s punitive policies toward Iran and China.

Writing on the Middle East Eye website, Iran expert Shireen T Hunter argues the partnership will render Iran dependent on China while providing Beijing with a presence in the Gulf and altering the balance of power in the region.

“A major reason for Iran’s shift towards China and other Asian countries, known locally as the ‘pivot to the east’, has been the failure of Iran’s repeated efforts, beginning with the administration of Ayatollah Hashemi Rafsanjani [1989-97], to expand economic relations with the West as a prelude to better political ties,” she wrote.

The West refused, largely due to US opposition. It remains bitter over the ousting of its ally, Shah Reza Pahlavi, and the 1979-81 detention of staff at Washington’s Tehran embassy.

To protect US interests in the region Hunter recommends that Washington drop this policy, return to the nuclear deal, lift sanctions, and allow US firms to trade with Iran.

The government in Damascus has no option but to turn to Beijing, which counts on Syria as another key partner in the Belt and Road project. China has pledged to boost co-operation in the political, economic and social spheres, and to participate in the country’s post-war reconstruction.

Like Russia, China supports President Bashar al-Assad, who is seen by both as a stabilising figure in an unstable region. Beijing and Moscow fear the government’s removal would fragment Syria into fighting jihadi fiefdoms. Chinese Uighurs and Russian Caucasians are among the jihadis who have expanded operations from Syria to Iraq, the Gulf, north and sub-Saharan Africa and Europe.

Angered over the refusal of Western donors and the International Monetary Fund to bail out Lebanon as it teeters on the brink of economic ruin, Beirut is also considering a pivot.

Politicians proposing this option appear to have the backing of Maronite Catholic patriarch Bishara al-Rai , who recommends a policy of “neutrality” in regional affairs, notably the rivalry between Iran and Saudi Arabia, while maintaining Lebanon’s support for the Palestinians and opposition to Israel, a policy backed by China.