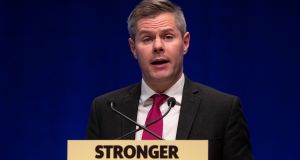 Scotland’s finance secretary Derek Mackay who has resigned with immediate effect after allegations emerged that he sent hundreds of messages to a 16-year-old boy. Photograph: Jane Barlow/PA Wire

Derek Mackay, Scotland’s finance secretary, has resigned his cabinet post only hours before delivering next year’s budget after he texted a 16-year-old boy.

The Scottish Sun published a long list of text messages Mr Mackay (42) sent the teenager, calling him “cute”, discussing his new haircut and inviting him to dinner and to accompany him to a parliamentary event as his guest.

In a statement released on Tuesday morning, Mackay revealed he had tendered his resignation to Nicola Sturgeon, the first minister, last night, with immediate effect.

Mackay, one of the party’s most prominent figures and a long-standing Scottish National party national convenor, had been widely seen as a contender to replace Sturgeon as SNP leader.

His statement read: “I take full responsibility for my actions. I have behaved foolishly and I am truly sorry. I apologise unreservedly to the individual involved and his family.

“I spoke last night with the first minister and tendered my resignation with immediate effect. Serving in government has been a huge privilege and I am sorry to have let colleagues and supporters down.”

Mr Mackay was due to deliver the Scottish government’s draft budget for 2020/21 at Holyrood later on Thursday. It will instead be presented by Mr Mackay’s deputy, Kate Forbes.

Ms Sturgeon responded: “Derek has taken full responsibility for his actions and apologises unreservedly for them to the individual involved and to those he has let down. He has submitted his resignation as a government minister which I have accepted.

“Derek has made a significant contribution to government. However, he recognises that his behaviour has failed to meet the standards required.” –Guardian