It started with a kiss: Trump, Macron and a presidential bromance

The happy couple: Leaders’ body language borders on the intimate at White House

During his state visit to the White House, French President Emmanuel Macron found a kinship with US President Donald Trump. Footage: White House 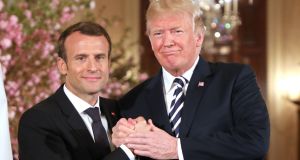 The couple seemed happy to be together again.

When US president Donald Trump welcomed French president Emmanuel Macron to the White House on Tuesday for the first official state visit of the Trump administration, their body language went beyond the usual respectful handshakes of two world leaders meeting for high-level talks and bordered on the intimate.

There was a mutual kiss on the cheek in the East Room, where Macron clasped hands with Trump, pulling him in for an embrace and a brief peck as Trump puckered his lips slightly to reciprocate.

“I like him a lot,” Trump explained to reporters and officials looking on. Earlier in the Oval Office, the president had gently brushed what he said was dandruff off Macron’s shoulder. “We have to make him perfect,” Trump (71) said of the trimmer Macron (40).

Moments later, as they sat side by side, Macron placed his hand on Trump’s knee. For all of the disagreements and differences of opinions the presidents hashed out privately on Tuesday – none more prominent than whether to keep or scrap the nuclear deal with Iran – Trump and Macron seemed to revel in each other’s presence, pouring on the charm.

Perhaps it was a diplomatic strategy on the part of Macron, who hosted Trump last summer at the Bastille Day parade in Paris. The French president came to the United States with an improbable wish list for the American president, including staying in the Iran deal, keeping US troops in Syria and exempting European countries from steel and aluminium tariffs.

Or perhaps Trump was simply trying to please, or dominate, his guest. Whatever the case, there was no mistaking the bromance between the two leaders as they praised each other effusively and emphasised that they saw eye to eye, even if they did not agree issue by issue.

Trump took Macron’s hand as they went to walk into the Oval Office, not letting go as they strolled away. When Trump coyly foreshadowed what his decision would be next month on the fate of the Iran deal – perhaps only Macron had an idea what he would do, he said, glancing over at him – the French president winked in silent response, as if sharing a secret with a confidant.

It was a stark contrast to the chilly reception Trump appeared to receive from his wife, Melania, earlier in the day as they awaited the Macrons’ arrival on the South Lawn, when he reached his fingers over gingerly to try to clasp hands with Mrs Trump, who at first did not reciprocate. Ultimately, they did hold hands.

On Tuesday evening, Trump and Macron donned tuxedos and greeted each other at the North Portico of the White House with the traditional French two-cheek kiss before heading with their wives into a lavish state dinner. They gushed over each other during toasts at the affair, where the Trumps welcomed Macron, his wife, Brigitte and around 120 other people in the State Dining Room for a meal that included rack of lamb and nectarine tart.

“May our friendship grow even deeper, may our kinship grow even stronger and may our sacred liberty never die,” Trump said to Macron, clutching his arm after the two clinked glasses. Macron marvelled at their unlikely friendship, saying no one could have predicted two years ago that the two men would be together at the White House. “I got to know you, you got to know me,” Macron said.

“We both know that none of us easily changes our minds, but we will work together, and we have this ability to listen to one another.”

The White House staff had filled the room almost to the point of being cramped, with 13 tables, a dynamic that East Wing aides described as “intimate.” Golden cutlery, gold-rimmed glasses and gold-bordered china adorned tables festooned with large white floral arrangements and slender candles.

The guest list was tightly controlled and had been the subject of internal deliberations for weeks, to the point where several versions of it were drafted, according to one White House official. A few high-profile Trump confidants slipped through, including Rupert Murdoch, the Australian-born media mogul who has parlayed his New York tabloid-era relationship with Trump into a direct line with the president, who attended with his wife, the former supermodel Jerry Hall.

Members of Trump’s inner circle were also in attendance: Stephen Miller, the senior adviser for policy who has been with Trump since the beginning of his administration, attended without a date. Mike Pompeo, the CIA director and Trump’s pick for secretary of state, accompanied by his wife, Susan, sat at the presidents’ table, along with Tim Cook, the chief executive of Apple. Treasury secretary Steven Mnuchin, whom the president has trusted since their days together on the campaign, attended with his wife, Louise Linton.

Observers had speculated about which family members might have made the cut, but aside from Melania Trump, Ivanka Trump and Jared Kushner, who are both senior advisers in the West Wing, were the only ones to attend.