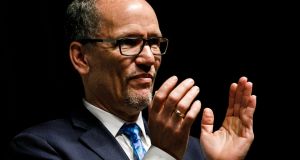 Tom Perez, the chairman of the Democratic National Committee. “Rather than reporting Russia’s offer to meddle in a US election, the Trump campaign welcomed Russia’s help.” Photograph: EPA/Justin Lane

US president Donald Trump’s legal challenges continued to mount on Friday as the Democratic National Committee (DNC) sued the Trump campaign in a federal court in Manhattan, alleging it conspired with Russia to swing the 2016 election.

The 66-page document filed on Friday named Russia, the Trump campaign and Wikileaks as defendants, as well as senior members of Mr Trump’s campaign team, including his son Donald and son-in-law Jared Kushner.

“During the 2016 presidential campaign, Russia launched an all-out assault on our democracy, and it found a willing and active partner in Donald Trump’s campaign,” said the DNC chairman Tom Perez.

The lawsuit taken by the Democratic Party argues that the Russian government notified the Trump campaign in advance that it had stolen Democratic emails designed to help Mr Trump win the election. “Rather than reporting Russia’s offer to meddle in a US election, the Trump campaign welcomed Russia’s help,” Mr Perez said.

The DNC is seeking millions of dollars in compensation for Russia’s “brazen attack on US soil” and the Trump campaign’s alleged collusion.  Wikileaks founder Julian Assange is also being sued.

While the memos contain much information that was previously in the public domain, they shed new light on Mr Trump’s thinking in the months leading up to Mr Comey’s firing – a key focus of special counsel Robert Mueller’s inquiry into Russian interference in the election.

The memos show Mr Trump’s preoccupation with the infamous dossier by former British spy Christopher Steele, which contains salacious allegations about contacts with prostitutes during a trip to Moscow, which Mr Trump denies. However, the memos suggest that the FBI corroborated at least some of the information in the disputed dossier.

Mr Trump tweeted from his estate in Mar-a-Lago, Florida, that the newly released memos “show clearly that there was NO COLLUSION and NO OBSTRUCTION”. He also accused Mr Comey of leaking classified information and repeated his claims of a “witch hunt” against him.