US president Donald Trump has spoken off his "special relationship" with his French counterpart Emmanuel Macron, even pretending to clean "dandruff" off of Macron's shoulder. Video: The White House 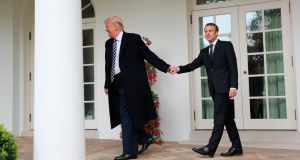 US president Donald Trump rounded on Iran yesterday, triggering concerns that the United States will withdraw from the 2015 nuclear deal when a deadline occurs next month.

Speaking during a press conference with French president Emmanuel Macron at the White House, Mr Trump warned that “if Iran threatens us in any way, they will pay a price like few countries have ever paid”.

Earlier in the day he dismissed the accord as “insane” and “ridiculous”. The pact committed Iran to ceasing nuclear activities in exchange for easing international sanctions.

“It should have never ever been made,” said Mr Trump of the 2015 deal negotiated by his predecessor Barack Obama and other world leaders. “[If] they restart their nuclear programme they will have bigger problems than they’ve ever had before,” he added, as he sat beside Mr Macron in the Oval Office. “They’re not going to be restarting.”

His comments come as Mr Macron seeks to convince the United States to keep faith with the deal, agreed between Iran and the five permanent members of the UN Security Council – the US, Britain, Russia, France and China – as well as Germany and the EU.

The French president has struck up a strong working relationship with his mercurial US counterpart and suggested European leaders are considering a “new deal” that could take on board some of the US concerns.

In particular, the two leaders discussed Iran’s broader role in the Middle East, including the war in Syria, suggesting that a codicil to the agreement could be negotiated which would address Tehran’s growing influence in the region, he indicated.

“When they made the Iran deal . . . they should have made a deal that covered Yemen, that covered Syria, that covered other parts of the Middle East where Iran is involved. They didn’t do that,” said Mr Trump.

But US concerns with the agreement run much deeper. Mr Trump, along with much of the Republican establishment, is concerned with many aspects of the accord. These cover the inclusion of sunset clauses, problems regarding access to nuclear sites and the country’s ballistic missile programme.

By May 12th, Mr Trump must decide whether to sign a waiver lifting US sanctions on Iran. He has indicated this will not happen if US concerns are not addressed.

While North Korea announced a halt to its nuclear programme last weekend, the country has displayed no commitment to abolishing its existing arsenal

The challenge for European signatories to the pact is to meet US requests without alienating Iran, which has warned that it is “all or nothing” when it comes to the agreement. Discussion of the Iran agreement is also likely to dominate German chancellor Angela Merkel’s meeting with the US president on Friday.

On North Korea, Mr Trump said he hopes the planned summit with Kim Jong-un, whom he described as “very honourable”, will happen “very soon”.

But in an indication of the scale of challenges that lie ahead, he clarified during his press conference that when he speaks of “denuclearisation” of North Korea, he means “they get rid of their nukes”. While North Korea announced a halt to its nuclear programme last weekend, the country has displayed no commitment to abolishing its existing arsenal, a prospect that most experts believe is unlikely.

Mr Trump’s meeting with his French counterpart followed a morning of pomp and ceremony at the White House. Mr Macron and his wife attended a military parade and were due to attend a state dinner at the White House on Tuesday night. They also visited Arlington cemetery in recognition of the long-standing military alliance between the two countries.

Mr Macron will continue his three-day state visit to the Untied States on Wednesday when he addresses a joint session of Congress.