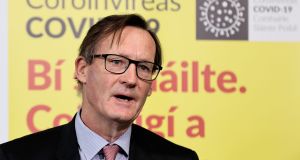 Up to 2,000 cancers may have been “lost” as a result of the disruption caused by the Covid-19 pandemic, according to the head of the National Cancer Control Programme.

The figure is an estimate and Prof Risteárd Ó Laoide, national director of the programme, says he hopes it can be reduced as more patients present later this year.

Activity at rapid access breast, lung and prostate cancer clinics fell off sharply in the spring but has since recovered to such an extent that attendances are now greater than they were in 2019.

Referrals fell to 64 per cent in March across the three clinics but now stand at 107 per cent compared to last year, Prof Ó Laoide told the weekly HSE briefing on Thursday.

Breast clinic referrals are at 109 per cent, lung clinics at 91 per cent and prostate at 92 per cent.

These three types of cancer account for about 20 per cent of all cancers, leading to the wider estimate of cancers lost.

The number of cancer patients treated so far this year is 3,114, compared to 3,492 in the same period last year.

Asked about the potential impact of the lost cases, Prof Ó Laoide said this wouldn’t be know until detailed data about diagnoses was published in a few years’ time.

The impact will vary for different cancers and for different patients. It would be less for prostate cancer patients, for example, than for lung, because this cancer grows more slowly.

The older a patient, too, the less the effect because the growth the cancer may be slower and other causes of death can intervene, he said.

Prof Ó Laoide said endoscopy services were the worst affected last spring, with a 90 per cent drop in attendances, but this was not back to 80 per cent activity.

He said the NCCP’s approach has been to seek out the most urgent cases to be seen quickly. Weekend clinics had been organised, and new IT solutions put in place.

“We’re trying to maximise our activity, but this is difficult because we were already stretched before Covid and new work practices to protect against the virus have slowed up services. We were running at full speed before; now, we’re doing it with two stones on our back.”

HSE bosses said the health services was going into winter in a stronger position than last year, though the position was fragile due to Covid-19.

Attendances at emergency departments are down 15 per cent and trolley numbers are 70 per cent down.

However, HSE chief executive Paul Reid said that despite improving trends, the number of Covid-19 patients in hospital and ICU remained “stuck”.

He also expressed concern about virus outbreaks in hospitals in Tallaght, Loughlinstown, Letterkenny, Limerick, Naas and Kilkenny. Some 535 staff at the hospitals are currently off work due to infection or being a contact, up from 450 last week.

One of those hospitals, St Columcille’s, Loughlinstown, said on Thursday that the number of confirmed Covid-19 patients had fallen at the hospital from 31 to 28.

The number of staff currently unavailable had dropped from 58 to 27, with a further three staff members to return to work on Friday.

The HSE briefing heard that seven nursing homes are currently categorised as being at significant risk, down from 10 last week.

Mr Reid said there was now “light at the end of a very long, dark tunnel”.

But whatever was decided this week in terms of the easing of restrictions, it was vital that people continued to protect themselves, their families and their friends, he said.

The positivity rate from serial testing in nursing homes is 0.4 per cent, while in food plants, it is 0.7 per cent.

At the start of the briefing, Mr Reid expressed his condolences on the death of Patricia Carrick, who recently settled a case against the HSE and a testing laboratory over the misreading of her CervicalCheck slides.

Mr Reid, who said he had spoken to Ms Carrick’s husband last week, apologised for “negligence and misreading” of Mrs Carrick’s smear tests.