After Trump, the GOP must accept a new kind of Republicanism

The party can retrench or learn to helm, not dismantle, an interventionist state 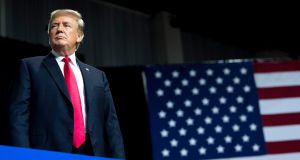 Thirty years have passed since a free-market Republican won a US presidential election. Even he, George H W Bush, signed tax rises into law and embroidered his Reaganism with patrician manners. Since then, the party’s winners have been his son, George W, who widened Medicare and further federalised education, and Donald Trump, who ran (though has not governed) as a tribune of the workers.

The latest election did not trigger the decline of small-government Republicanism. It made unignorably vivid a decline that had long begged to be spotted. The votes are not there for severe incursions into the US welfare state – nor have they been for some time. Trump’s coup was to notice.

In that sense, the president’s rift with the Koch brothers is so much warm-down sparring. The real bout was long ago won by Trump. Charles and David Koch are donors who encourage a state-pruning zeal in Republican candidates. They withhold cash from ideological strays, such as Kevin Cramer, a protectionist Senate hopeful in North Dakota. They will put up a fight in the coming years, as will the think tanks and activists who believe that Republicanism is supply-side economics, or it is nothing.

But the one thing money cannot smother is electoral logic. Over time, unless voter sentiment changes, the Republican offering will have to resemble Trump’s of 2016 more than that of Mitt Romney and Paul Ryan four years earlier. This does not mean socialism, for which there is little-to-zero clamour. It means the acceptance of the state in its current scope, if not in all its details. It means recognising how many Americans count on it. You might call this respect for a flawed but workable status quo “conservatism”.

The party does not lack experience with pragmatic accommodations. As well as Trump and George W Bush, Richard Nixon reconciled Republicans to the federal entitlements of the 1960s. Minus the Bloomsbury loucheness, he even admired John Maynard Keynes.

Still, compromise hurts. Free-market Republicans have survived on polite fictions: that the US has a radically smaller state than most western countries, that trade is the default in American history, that their ideas are the folk wisdom of the nation – if only politicians could communicate them properly. The truth, that America has a large, complex and redistributive state, and with some public assent, is hard to accept. But when Republicans do, they tend to win.

Read past the pugilism and Trump’s tweet about the Koch brothers contained an insight. “Nice guys with bad ideas”, their “globalist” views clash with “real Republican” audiences, he said. As recently as 2012, a “real Republican” denoted a capitalist. In 2018, it is someone who wants curbs on the freedom of capital – to import labour, to offshore factories, to upturn communities. The ideological trend of the party is towards Trump, not the donor class.

If a statist GOP seems fanciful, recall that political realignments dot the history of this protean republic. We may be living through a lag between one era and another. Republicans who entered politics to cut the state and say “freedom” a lot are marooned by the rise of Trump. They must feign enthusiasm for his market-meddling or cop an earful from their constituents.

Ryan’s face is a portrait in swallowed doubts. No party can sustain this tension for long. The Republicans have to choose. They can revert to Koch-ism, and forfeit much of their base. Or they can recruit a new kind of candidate, who enters politics to helm, not dismantle, the interventionist state.

This is the terror of free-market Republicans: the Trump years might turn out to be the easy bit. They can smuggle through business-friendly cuts to tax and regulation under his friend-of-the-little-guy patter. Trump is no stickler for consistency. But once he goes, the party he has transformed could throw up – and this is not as oxymoronic as it reads – a coherent populist. Picture a Trump-ish politician who is serious about infrastructure and the lot of the worker. Imagine the potential audience for such a candidate.

Paternalist economics laced with social conservatism: to a European spectator, it suggests the Christian Democracy of Germany, or the Gaullism of France, or the High Toryism of Britain. In the democracies of postwar Europe, the centre-right has often embraced the state as an instrument of national togetherness.

Even as America and Europe become estranged at the highest level, their domestic politics are about to resemble each other in this crucial respect. In a cleaved West, cherish unities where you can find them. – Copyright The Financial Times Limited 2018