Trump thanks North Korea for return of US soldiers’ remains 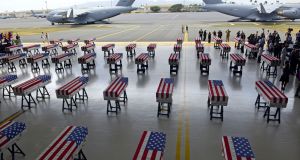 US president Donald Trump thanked North Korean leader Kim Jong-un for his “kind action” in returning the remains of American soldiers killed in the Korean War, adding that he was looking forward to seeing him “soon”.

Hours after the remains of the US soldiers arrived at a naval base in Hawaii, Mr Trump thanked Mr Kim on Twitter. He referenced a letter from the North Korean dictator, which the White House confirmed the president had received on Wednesday.

Press secretary Sarah Huckabee Sanders said the ongoing correspondence between the two leaders was aimed at advancing the commitments made at the June summit in Singapore. She later said that no specific plans for a second meeting were under way. Mr Trump has been coming under pressure over Pyongyang’s apparent failure to date to keep to its commitments.

The Washington Post reported this week that North Korea was constructing new missiles at a factory that produced the country’s first intercontinental ballistic missiles capable of reaching the United States, in spite of the landmark summit between Mr Kim and Mr Trump in June.

The newspaper cited US intelligence sources who pointed to satellite images of the activity just outside the North Korean capital, Pyongyang.

US vice-president Mike Pence travelled to Hawaii on Wednesday for the arrival of an aircraft carrying the remains of what are believed to be American service members killed in the Korean War of 1950 to 1953. The remains were returned on foot of a request to Mr Kim at his summit with Mr Trump in June. They have been sent to laboratories for testing, but it is unclear if they will correlate to the identities of fallen American soldiers.

“I know President Trump is grateful that chairman Kim kept his word, and we see today as tangible progress in our efforts to achieve peace on the Korean Peninsula,” Mr Pence said at the ceremony at the US base in Honolulu.

Meanwhile, tensions between Turkey and the United States escalated, after Ankara warned it would retaliate against new sanctions announced by the US treasury earlier this week in response to the detainment of US pastor Andrew Brunson.

The Turkish lira, which fell sharply on Wednesday night after the announcement of the sanctions, continued to weaken on Thursday.

The US treasury department froze the assets of Turkey’s interior minister Suleyman Soylu and justice minister Andulhamit Gul, over what the Trump administration says is the unjust detention of Mr Brunson, a 51-year-old pastor, originally from North Carolina.

Mr Brunson, who has been living in Turkey for more than 20 years, was arrested under the Turkish government’s crackdown in 2016 following an attempted coup in the country. He was recently moved from jail to house arrest, but the US government has called on Turkish authorities to release him.

Separately, Mr Trump’s national security team appeared in the White House press room on Thursday to provide an update on measures being taken by the administration to protect the US electoral system from Russian interference, though Ms Huckabee Sanders barred questions about the 2016 presidential election.

FBI director Christopher Wray said protections were being put in place to maintain the integrity of the election system, including private sector partnerships with tech companies, and intelligence sharing with allies.

“The president has made it clear that his administration will not tolerate foreign interference in our elections from any nation state or other dangerous actor,” Ms Huckabee Sanders said.

Also on Thursday, the Environmental Protection Agency announced new rules on car emission standards which would undermine one of the signature climate-change policies of the Obama era. As well as freezing emissions standards at 2020 levels, the agency said it would withhold a waiver given to California allowing it to exceed national standards, a proposal that is likely to be strongly resisted by the state.