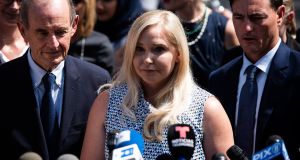 Virginia Giuffre, an alleged victim of Jeffrey Epstein, center, pauses while speaking with members of the media outside of federal court in New York, on Tuesday. Photographer: Mark Kauzlarich/Bloomberg

A woman who alleges she was a victim of convicted paedophile Jeffrey Epstein and claimed she was forced into a sexual encounter with the Duke of York has urged the royal to “come clean”.

Virginia Giuffre was speaking to reporters after a hearing for alleged victims of the disgraced financier and said Prince Andrew, a son of Queen Elizabeth, “knows what he’s done”.

Since Epstein’s death, there have been a number of reports about his relationship with the duke, including that the pair travelled together on Epstein’s private jet with teenager Virginia Roberts, now known as Giuffre.

Mrs Giuffre has claimed in court papers in Florida that she was forced to have sex with the duke when she was aged 17, under the state’s age of consent.

Her allegations, which the duke denies, were struck from US civil court records in 2015 after a judge said they were “immaterial and impertinent”.

Buckingham Palace has contested reports about the duke’s links to Epstein, including the private jet flights, over “a number of inconsistencies”.

On Tuesday, 16 women who claim they were victims of Epstein spoke at a hearing in New York after a judge offered the accusers the opportunity to give statements about the impact of the alleged offending.

“He knows exactly what he’s done and I hope he comes clean about it,” Mrs Giuffre said outside court in response to a request for comment about the duke.

He also reiterated that it was a “mistake” seeing Epstein (66) after the American’s release from an 18-month prison term in 2010 for prostituting minors.

In the statement, the duke said: “It is apparent to me since the suicide of Mr Epstein that there has been an immense amount of media speculation about so much in his life.

“This is particularly the case in relation to my former association or friendship with Mr Epstein.

“Therefore I am eager to clarify the facts to avoid further speculation.

“I met Mr Epstein in 1999. During the time I knew him, I saw him infrequently and probably no more than only once or twice a year. I have stayed in a number of his residences.

“At no stage during the limited time I spent with him did I see, witness or suspect any behaviour of the sort that subsequently led to his arrest and conviction.”

Epstein was found dead on August 10th in his prison cell in New York, where he was being held on sex trafficking charges.–PA