Impeachment hearings: Official who listened in to Ukraine phone call to testify

Trump hints he may testify at public hearings, ‘though I did nothing wrong’ 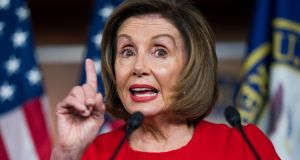 Speaker of the House Nancy Pelosi said Mr Trump ‘could come right before the committee and talk, speak all the truth that he wants if he wants’. Photograph: Jim Lo Scalzo/EPA

The public hearings in the ongoing impeachment inquiry into US president Donald Trump resume in Washington on Tuesday, with national security official Alexander Vindman among those due to testify.

Mr Vindman, a decorated army veteran who was born in Ukraine but emigrated to the United States when he was a child, is one of the few witnesses who listened in to the phone call between Mr Trump and Ukrainian president Volodymyr Zelenskiy on July 25th. That phone call, and Mr Trump’s call for his Ukrainian counterpart to investigate former vice-president Joe Biden and his son Hunter, prompted House Democrats to open an impeachment inquiry in September.

Mr Vindman told investigating committees last month in private testimony that he made two official complaints about the US administration’s policy towards Ukraine, once after the July 25th phone call. The other complaint followed a July 10th meeting he attended with US ambassador to the European Union, Gordon Sondland, former national security advisor John Bolton and representatives of the Ukrainian government.

He alleged that Mr Sondland told the Ukrainians during the meeting that they should undertake specific investigations in order to secure a meeting with the president. Democrats are seeking to prove that Mr Trump improperly asked a foreign government to undertake politically motivated investigations into his rival. Mr Biden, whose son Hunter served on the board of a Ukrainian gas company while he was vice-president, is running for the Democratic nomination to become the party’s nominee in next year’s president election.

In addition to Mr Vindman, Jennifer Williams, an aide to vice-president Mike Pence who was also on the July 25th call, is due to testify on Tuesday. Ms Williams gave a closed-door deposition to the intelligence committee over the weekend, leading to a rebuke from Mr Trump on Twitter who denounced her as a “never Trumper”. Kurt Volker, the former special envoy to Ukraine, and Tim Morrison, a National Security Council employee, are scheduled to testify later in the day.

Even though I did nothing wrong, and don’t like giving credibility to this No Due Process Hoax, I like the idea

The resumption of the public hearings, which began last week, come as Mr Trump himself suggested that he could testify in the impeachment hearings. It follows a claim by House Speaker Nancy Pelosi in a TV interview with CBS News on Sunday that the president was welcome to testify. “[He] could come right before the committee and talk, speak all the truth that he wants if he wants. We look forward to seeing” any exculpatory information he may have, she said.

In a tweet on Monday, Mr Trump said he would “strongly consider” testifying.

“Even though I did nothing wrong, and don’t like giving credibility to this No Due Process Hoax, I like the idea & will, in order to get Congress focused again, strongly consider it!” Trump said.

The president submitted written testimony to the Mueller investigation into Russian electoral interference which concluded earlier this year. On Monday, it emerged that House investigators could be seeking information related to that testimony, amid concerns about the veracity of some of the information given by the president. In a federal court in Washington on Monday, the judge was told that the House Judiciary Committee is seeking access to grand jury materials as part of “urgent efforts” to determine whether Mr Trump committed impeachable offenses. The development suggests that Democrats could be examining whether the president’s statement to Mr Mueller could become an article of impeachment.

The request by the committee follows Roger Stone’s conviction on Friday for lying to Congress over information requested from him as part of the Mueller investigation. Stone is a long-term friend of Mr Trump who was also involved in his 2016 election campaign.