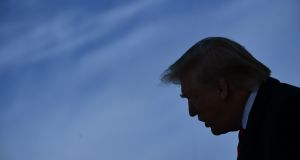 US president Donald Trump speaking to reporters before departing from Andrews Air Force Base in Maryland. Photograph: Brendan Smialowski/AFP via Getty Images

US president Donald Trump said on Saturday that the White House would probably release a transcript of a second call with Ukrainian president Volodymyr Zelenskiy on Tuesday.

“We have another transcript coming out which is very important,” Mr Trump told reporters at Joint Base Andrews before leaving for a visit to Tuscaloosa, Alabama. “I will give you a second transcript, because I had two calls with the president of Ukraine. ”

Mr Trump said the second transcript would probably be released on Tuesday.

The ongoing impeachment inquiry against the US president centres on a July 25th call between Mr Trump and Mr Zelenskiy in which, according to an incomplete memo released by the White House and repeatedly and incorrectly referred to by Mr Trump as a “perfect” transcript, the US president asked his Ukrainian counterpart to “do us a favour”.

Testimony released this week has painted a damning picture of attempts to persuade Ukraine to investigate former vice-president Joe Biden and his son Hunter, potentially in return for an unfreezing of nearly $400 million in military aid and a White House meeting with Mr Trump.

The July 25th call and concerns over its content became known when an intelligence official filed an anonymous report. Mr Trump and allies such as the Kentucky senator Rand Paul have led Republican pressure for the media to name the whistleblower, contrary to federal law.

On Saturday, House Republicans said Hunter Biden and the whistleblower should be called to testify in public hearings set to begin next week.

Adam Schiff, the Democratic chair of the House intelligence committee, reportedly said he was “evaluating” the list but added that the inquiry “will not serve – as a vehicle [for] the same sham investigations into the Bidens or 2016 that the president pressed Ukraine to conduct for his personal political benefit”. – Reuters/Guardian