In this extract from Pathways, a documentary about successful Irish creatives who are making it abroad, Donal Dineen meets playwright Enda Walsh at his home in London. Video: Donal Dineen/Steve O’Connor/Richie Egan/St. Patrick's Festival Commission 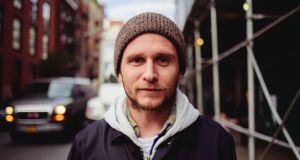 Photographer Rich Gilligan: ‘For years I sat on a bus travelling in and out of Blanchardstown looking at these magazines, thinking wouldn’t it be amazing to do that, imagine living in New York... I feel really lucky, but in another way, you make your own luck.’

Rich Gilligan knew from the age of 16 that he wanted to be a skate photographer. Growing up in north Dublin, he used to borrow his dad’s Olympus point and shoot camera, to take pictures of him and his friends “messing around”.

“We were really bad skateboarders. I was looking at these magazines with photographs of the Brooklyn Banks in New York with some pro doing some amazing trick, and I am down outside the credit union in Blanchardstown, going, how can I make this look like this?”

Sitting on the edge of a skate park in New York, where he now works taking pictures that feature in those very same magazines, he speaks modestly of his passion, dedication and talent that turned that dream to reality.

Ireland’s propensity to produce writers, actors and artists such as Rich Gilligan, on a scale totally disproportionate to its size and population, is often remarked upon, but seldom examined.

Our small island on the edge of Europe also has the highest percentage of its native-born population living outside of the country, and these two factors combined have resulted in a creative Irish diaspora which punches well above its weight internationally, across a range of artistic disciplines.

Are there identifiable factors which trigger such innate creativity among Irish people, which we then take to the world?

This is the question Donal Dineen, Irish radio presenter, photographer and film maker, is asking in a new film Pathways, commissioned as part of this year’s St Patrick’s Festival, featuring interviews with 10 Irish artists who have “navigated their way through stormy waters, buffeted by vagabond winds, to reach calmer shorelines and bring home the jewels”.

Just being Irish can open doors abroad in a very direct way – London-based DJ and radio presenter Annie Mac tells of getting her first radio gig at the BBC because “nobody else in the office was from Dublin . . . and the producer at the time liked the way I said ‘punk’”.

Pathways: Irish Routes to the Art of the Matter

But for other artists interviewed, the influence of their nationality on their work, and the interaction between their sense of place, of origin and belonging, and their art, is more complex.

For Dublin-born playwright Enda Walsh, who has lived in London since 2005, “all drama is about identity”, and “for Irish people, that is a default thing”, which has given him an advantage as a dramatist.

“People want to know your story in Ireland. who are you and what are you at . . . that is in the DNA of every Irish person, but is also the starting point for every dramatic moment on stage.”

Theatre director and actress Fiona Shaw, who left Co Cork for London in her early 20s, has been similarly inspired throughout her life by the “richness to growing up in Ireland”.

“Everything comes from your childhood. I have lived much more of my life in London than in Cork, but it is those first 20 years that tell you everything. All those people who came to the house who were part of my parents’ life, they are the gold mine, they are the bomb that explodes your imagination.”

The Irish are great at telling stories about themselves, she says, but that insularity can be stifling. Leaving to pursue their art somewhere else gives artists the freedom to create work that shows little trace of their Irish origins.

Photographer Brian Cross, aka B+, is perhaps best-known for his chronicling of the Los Angeles hip-hop scene in the 1990s, which is about as far away from traditional Irish culture as you could get.

“It is a question I get asked all the time . . . how the f**k does someone from such a far-away place who is so new to a country come and find your way into a culture and become so embroiled in it?” he says.

“We have a much bigger capacity to transcend those kinds of differences than you might imagine.”

For Richie Egan, an electronic rock musician who performs as Jape, not knowing many people in Malmo in Sweden, where he has been living since 2012, has provided a vacuum in which his imagination can thrive.

“It is a much more solitary existence over here . . . I can spend a lot of time focusing without having to worry about meeting people on the street.”

Although his social life is much diminished, for his work being in Malmo is “way better, because there is nothing else to really do. Work as to be good enough to justify being here. Malmo is almost daring me to make really good work. Otherwise, why the f**k am I here?”

Although several of the artists interviewed by Dineen struggle to identify exactly how their Irish origins impact their work, they are proud of them, even if their art in and of itself betrays little about where they came from. But if any narrative thread can be drawn binding the interviews with these 10 very different Irish artists – which Dineen himself struggles to do – it is the inspiration triggered by the people and places around them in their early life in Ireland, which continues to fuel their creativity to this day, wherever in the world they are.

‘Pathways: Irish Routes to the Art of the Matter’ is available to watch on the St Patrick’s Festival YouTube channel, and will be screened as part of Where We Live presented by THISISPOPBABY in The Complex in Smithfield on March 18th.