America Letter: The US slave-turned-campaigner enjoyed a tour of Ireland in the 1840s 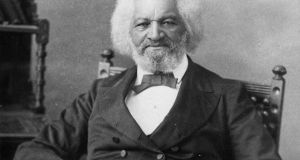 Last week in the elegant surroundings of the Yale Club in New York, educators and historians from across the United States gathered for the annual Frederick Douglass Book Prize.

The prize is run by the Gilder Lehrman Institute of American History, a non-profit institute that promotes the teaching of American history through its network of 16,000 affiliate schools.

Looking out over the glittering skyscrapers of Manhattan, teachers, students and some of the top names in US academia gathered for the award ceremony, that celebrates the best book written on slavery and abolition that year.

Just hours earlier President Donald Trump had announced his proposals to arm teachers in the wake of the Florida school massacre. But for the teachers and students gathered in New York, the conversation was about teaching, learning and the importance of preserving for the future the lessons of the past.

The annual prize is one of many events taking place across the United States this year to mark the bicentenary of the birth of Frederick Douglass, the slave-turned-campaigner, who perhaps did more than any other figure to publicise the horrors of slavery.

His story is an extraordinary one.

Born into slavery in a Maryland plantation in 1818, his “owner’s” wife began to teach him to read at the age of 12. But she soon stopped, under pressure from her husband, so Douglass began educating himself. Having moved to a new plantation, where he was whipped by his “owner”, Douglass escaped from Maryland at the age of 20, boarding a train in Baltimore heading north.

He and his wife settled in Massachusetts. From there his political activism grew, as he began attending a black church and attending abolitionist meetings. Douglass was much in demand as a speaker, his powerful oratorical skills matching his dazzling prose style. His 1845 autobiography, Narrative of the Life of Frederick Douglass, an American Slave, was a bestseller in the United States and won him global attention.

In the wake of the book’s publication in late 1845 he embarked on a two-year lecture tour of Britain and Ireland. It was to be a key moment in his life, one that is fictionally evoked in Colum McCann’s 2013 novel TransAtlantic. Douglass spent four months in Ireland, delivering lectures and meeting key figures in the abolitionist movement. “I can truly say,” he wrote at the end of his trip, “I have spent some of the happiest moments of my life since landing in this country, I seem to have undergone a transformation, I live a new life.”

His visit coincided with an important moment political moment in the country as the campaign for Irish independence intensified. He was deeply impressed by Daniel O’Connell, whom he met in Dublin.

O’Connell had long been a committed abolitionist, watching closely the developments in the United States. But despite his call on Irish-Americans to support African-Americans, his comments fell on deaf ears in the United States, where most of the Irish-American community and the Catholic leadership refused to take sides in the growing call to abolish slavery in the run up to the American Civil War.

Douglass’ visit to Ireland also coincided with the Great Famine. His encounter with the horrific realities of the deepening crisis as he travelled through the Irish countryside are captured in McCann’s book. “The children looked like remnants of themselves. Spectral. Some were naked to the waist. Many of them had sores on their faces. None had shoes. He could see the structures of them through their skin. The bony residue of their lives.”

So too is his ambivalence towards the plight of the native Irish, as he is confronted with deepening unease with the crisis unfolding outside the safe enclave of his Protestant hosts, McCann writes. A priest glares at Douglass and his hosts as he administers the last rites as the dying and emaciated scramble to board ships to America at Cobh harbour. Douglass reflects: “If he himself spoke out on behalf of the poor Irish, what would happen? What language would he create for this? He could not speak out against those who had brought him here as a visitor. There was only so much he could take upon himself. The Irish were poor, but not enslaved.”

As part of the bicentenary celebrations, Quinnipiac University is hosting a series of events including an exhibition on Douglass’s stay in Ireland. The Irish embassy in Washington is also supporting several events, including the staging in May of specially-commissioned plays by the Irish arts group Solas Nua.

Two hundred years on from his death, the life of Frederick Douglass still acts as a powerful reminder of America’s fight for equality, justice and freedom in the not-so-distant past.