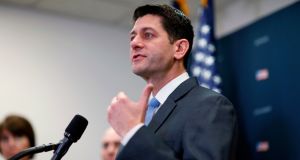 US house speaker Paul Ryan: has been invited to visit Ireland next January for the centenary of the first sitting of the Dáil. Photograph: Joshua Roberts/Reuters

Part of the job of Irish embassies is to host visiting delegations from the Oireachtas as they pass through the US capital.

This week was particularly busy, as Ceann Comhairle Seán Ó Fearghaíl, members of the Dáil budgetary oversight committee and Senator Catherine Noone were in town.

For Irish diplomats this brings with it a flurry of activity and diplomatic toing and froing as embassy officials seek to secure meetings with political heavyweights on Capitol Hill.

Irish politicians are extremely fortunate in their access to the US political scene, thanks to the continuing strength of Irish-American identity and the work of the embassy in Washington. Despite the market turmoil and ongoing negotiations to avoid another government shutdown, house speaker Paul Ryan and several prominent congressmen made time to meet the visiting Dáil delegation this week.

While some of the delegation attended the National Prayer Breakfast on Thursday, one of the main purposes of the visit was to learn more about the Congressional Budget Office, which provides analysis to Congress on the impact of budget policies. The Irish Government set up a similar body last year – the Parliamentary Budget Office – after the OECD warned that Ireland was lagging behind other countries when it came to budget scrutiny.

The other purpose of the visit was to mark the 100-year anniversary of the extension of certain voting rights to women in Ireland and Britain, and the election of the first women to parliament.

Ó Fearghaíl extended an invitation to Ryan to visit Ireland next January when the centenary of the first sitting of the Dáil, in the Round Room of the Manson House, will be marked.

The Ceann Comhairle also gave an address at the Irish Embassy in Washington to mark the upcoming centenary. He spoke about the role played by the Dáil in forging an emerging Irish national identity, as well as the legacy of Constance Markievicz, the first woman elected to the House of Commons – though of course she did not take her seat there.

There was also an enthusiastic questions-and-answers session, moderated by Ireland’s Ambassador to the US, Dan Mulhall, a keen historian.

One attendee in the audience who splits his time between the United States and Ireland said he was a fan of the late-night RTÉ programme Oireachtas Report. He asked Ó Fearghaíl how he dealt with unruly deputies, particularly “that Kerry man with the hat, and the man from Waterford who doesn’t dress well”.

The Ceann Comhairle responded with a smile, saying that he saw the role as an honour, and that he was proud to have never ejected anyone from the chamber. Unfortunately for him the Dáil had to be suspended the following day when the Kerry man with the hat and his brother engaged in a shouting match with Fianna Fáil TD Marc MacSharry.

The Irish and US parliamentary systems have much in common. Like the Oireachtas, the US Congress did not originally meet in its current home. As the nascent American nation emerged in the late 1780s, the first Congress gathered in a federal hall in New York, and later in Philadelphia. The design of Leinster House also reportedly influenced James Hoban, the Irish-born architect who designed the White House.

Though Congress is much larger – the bicameral legislature has 535 members – the Irish parliament is leading the way on one issue. Women’s representation in the Oireachtas is higher than in its US counterpart.

While the centenary of the election of the first female member of Congress was celebrated last year – a statue of Montana representative Jeannette Rankin stands proudly in the halls of Congress – women’s representation in the legislature stands at just 19.8 per cent compared to 24.7 per cent in the Dáil and Seanad combined. Five US states have never appointed a female representative to the House of Representatives.

There are also some Irish connections with Rankin, a suffragist who was elected in 1916, four years before women won the right to vote. In her early days in Congress, she introduced a motion calling for the US government to recognise Ireland’s independence, reflecting perhaps the strong Irish identity of her home state of Montana.

This week’s speech by Ó Fearghaíl was a timely reminder of the power and responsibility of parliamentary democracies.

In an inflammatory speech, US president Donald Trump this week accused Democrats who did not applaud him during his state of the union address of treason. In the current highly charged political climate in America, Congress continues to keep a check on the power of the president.

“We must always remind ourselves that a healthy political system and a healthy civil society do not just happen. They must be established, they must be constantly nurtured, upheld and sustained,” the Ceann Comhairle reflected as he wrapped up his address. In current political times, that message has particular resonance.