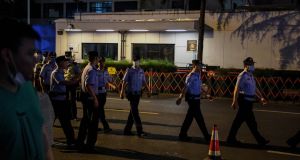 Police walk in front of the entrance of US consulate in Chengdu. Photograph: Noel Celis/AFP via Getty

Tensions between Washington and Beijing intensified sharply on Friday after China closed the US consulate in Chengdu in reprisal for the closure of the Chinese consulate in Houston, Texas, earlier this week.

China alleged that staff at the US representation had “interfered in China’s internal affairs and endangered China’s security and interests”.

The development came as the United States defended its decision to order China to close its Texas consulate on Wednesday, claiming that Chinese nationals were engaged in economic espionage.

The consulate’s links with universities and hospitals in the greater Houston area have come under scrutiny by US investigators. A Chinese national, who had originally been given sanctuary in the Chinese consulate in San Francisco, was arrested and was due to appear in court on Friday on charges of failing to disclose links with the People’s Liberation Army when applying for a visa.

Speaking at a briefing in Washington, a senior justice department official said a network of PLA associates who concealed their affiliation was operating in more than 25 cities across the United States, and the Chinese consulate had been giving guidance to people about evading detection.

“It has been an increase in malign activity, intelligence activity over time and at some point you say enough is enough,” the official said. A senior state department official also linked the clampdown on the Houston office with China’s pursuit of research into a coronavirus vaccine. Houston is home to some of the US’s best-known research hospitals and has emerged as a centre of medical research in recent years.

In a speech at the Nixon presidential library in California on Thursday evening, US secretary of state Mike Pompeo delivered one of his most combative speeches yet on China, claiming Beijing had walked away from promises regarding Hong Kong and the South China Sea.

Recalling Richard Nixon’s historic visit to China in 1972, he said that “the world was much different then”.

“Today China is increasingly authoritarian at home, and more aggressive in its hostility to freedom everywhere else,” he said, adding that “the free world must triumph over this new tyranny.”

He urged US allies to find “more creative and assertive ways” to press China to change, declaring: “Securing our freedoms from the Chinese Communist Party is the mission of our time.”

The tit-for-tat closure of diplomatic missions is the latest sign of tensions between the world’s two largest economies. Washington has slapped new sanctions on some Chinese companies over their alleged involvement in the repression of the Uighur minority.

It has also successfully persuaded some countries, most recently Britain, to exclude Chinese phone company Huawei from its planned 5G networks. US president Donald Trump has also repeatedly blamed China for the spread of coronavirus, which originated in the city of Wuhan late last year.