The Irish Times view on the US election: Trump’s uphill battle

The incumbent is in trouble, but it is not difficult to envisage a scenario that works in his favour in the autumn 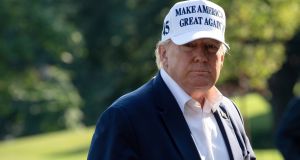 If the US presidential election were held today, Donald Trump would probably lose. A political landscape that looked propitious for the president at the beginning of the year has been turned on its head by the Covid-19 pandemic. On issues where he was performing strongly among voters, notably the economy, now he is weak. What seemed to be political strengths now look more like liabilities. Opinion polls consistently point to a convincing lead for Trump’s Democratic opponent, Joe Biden, both nationally and in the handful of swing states that will decide the outcome of the November election. A hundred days out, the Trump campaign has replaced its manager, revised its strategy and finds itself having to buy advertising in states such as Ohio, which six months ago were assumed to be safe bets for the property magnate.

Trump dismisses as “fake polls” those that show him doing badly, but his actions suggest he knows he is in trouble. Having downplayed the threat from coronavirus and deflecting blame for shortcomings in the official response, Trump has recently performed a 180-degree turn, acknowledging the gravity of the crisis as the virus spins out of control. The Republican convention in Jacksonville, Florida – a Covid-19 hotspot – has been cancelled. Having ridiculed Biden for wearing a mask, Trump now uses one himself. The red states where Trump is strongest, having been spared the worst of the disease in the Spring, are now in emergency mode, with cases and deaths growing every week. With his people hurting this badly, pretending everything was fine was only compounding the damage.

The pandemic has suspended normal campaigning. Biden has kept a relatively low profile, choosing his interventions carefully. That has worked well for the former vice-president, allowing him to set the terms of his campaign while leaving Trump all the space he needs to damage his own chances. Democratic voters are no more excited about Biden than they were a year ago, but for many suburban voters, polls suggest, the threat of a second term for Trump is enough to push them into the Biden camp. Meanwhile, the tentative economic recovery of early summer appears to be slipping backwards.

Time is running out for Trump, but it’s far too early to discount him. It is not difficult to envisage a scenario that works in his favour in the autumn, certainly if the virus is brought under control and a working vaccine is close to distribution. The polls could be wrong. He has the advantages of incumbency. Biden is prone to errors. Trump retains the full-throated support of the Republican Party, and could benefit from more foreign interference in the campaign. And the pandemic itself is a reminder that every campaign is vulnerable to the one factor that can change them in the most profound and unexpected ways: events.