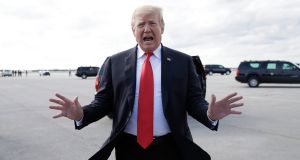 US president Donald Trump talks to the media before boarding Air Force One on Sunday at Palm Beach airport in Florida. Photograph: Carolyn Kaster/AP Photo

Obstruction of justice is a crime that requires more than overt acts. It also requires intent.

That principle helps explain special counsel Robert Mueller’s decision to veer away from pressing an obstruction case against President Donald Trump and instead leave it up to the US justice department.

Attorney general William Barr’s initial summary of Mueller’s report on Russian interference in the 2016 election and the possibility of collaboration with Americans, released on Sunday, indicates that Mueller withheld judgment about the circumstantial evidence that Trump’s critics say points to an intent to obstruct justice. Instead, he left that decision to the attorney general.

In turn, Barr and deputy attorney general Rod Rosenstein determined that the evidence collected by Mueller “is not sufficient to establish that the president committed an obstruction of justice offense,” according to Barr’s letter.

The evidence in Mueller’s still-unreleased report is likely to include Trump’s public statements of derision about justice department personnel and support for former aides charged with crimes, as well as claims by his former FBI director that the president tried to quash an investigation of his national security adviser.

Barr’s decision on the obstruction question is sure to rile Trump’s opponents but comes as less of a surprise to legal experts.

“Obstruction of justice requires an intent to obstruct or impede or influence an investigation,” said Seth Taube, a former federal prosecutor now at Baker Botts LLP, before Barr’s letter was made public. “The issue is not only did the president take some action which had the effect of obstructing or impeding or influencing a person, but did he also do so with the intent of obstructing an investigation?”

In his two years in the White House, Trump has repeatedly done things, said things and tweeted things that could be interpreted either as attempts to undermine investigations of him, his family and his business or merely as random thoughts from a man who is known to change his mind.

In his first few weeks in office, Trump asked then-FBI director James Comey for “loyalty,” Comey has said. A few weeks later, after national security adviser Michael Flynn resigned because of lies he told the FBI about his contact with Russia, Trump asked Comey to “go easy” on Flynn because he was a good guy, Comey contends. Trump has disputed Comey’s accounts of the conversations.

After firing Comey in May 2017, Trump told Lester Holt of NBC News that he did so in part because of his frustration over the FBI’s Russia investigation. He told Holt that he fired Comey at the recommendation of Rosenstein and then muddied the issue by adding: “And in fact, when I decided to just do it I said to myself, I said, you know, this Russia thing with Trump and Russia is a made-up story.”

Almost from the moment that a special counsel was appointed to continue the inquiry, the president repeatedly attacked that work as a “witch hunt” and even reportedly ordered his White House counsel to fire Mueller.

After it emerged that Donald Trump jnr met during the campaign with a Kremlin-linked Russian lawyer who offered damaging information about Hillary Clinton, Trump helped craft a public statement. That misleading statement claimed the meeting focused on international adoptions. Why the president tried to obscure an action that his team later termed perfectly legal could be chalked up to avoiding public embarrassment, of course.

Trump also mused publicly about a pardon for Paul Manafort, his former campaign chairman who has multiple convictions stemming from the Mueller probe. Mueller’s prosecutors noted the possibility of a pardon in their decision to terminate Manafort’s co-operation agreement over lies he allegedly told to investigators.

Along with these overt actions, Trump repeatedly criticised his appointed attorney general, Jeff Sessions, for recusing himself from the Russia investigation. He eventually pushed out Sessions and replaced him temporarily with Matthew Whitaker, a former US attorney in Iowa who had been critical of the Mueller probe.

Trump reportedly wanted Whitaker to push Geoffrey Berman, the man he appointed US attorney in Manhattan, to take over a New York inquiry that included the Trump organisation. Berman had recused himself from the matter, which grew out of crimes by onetime Trump lawyer Michael Cohen and involved possible campaign-finance violations stemming from hush money paid to a woman claiming sexual encounters with Trump. Trump denies not just the encounters but that he violated any campaign finance laws.

Trying to keep personal or embarrassing actions away from public scrutiny is not in itself a crime. Proving beyond a reasonable doubt that Trump was aiming to do something more would have required a great deal more, given that he was not deposed and that his reasons frequently seem to shift with statements that even he says are sometimes made for effect or political purposes.

The optics of Trump’s actions don’t matter, says Jacob Frenkel, a former federal prosecutor who is now at Dickinson Wright, speaking before Barr’s letter was released.

“The president may have done something interesting, remarkable and unprecedented in gravity,” he said of firing Comey and other matters. “But none of those three equals ‘beyond a reasonable doubt’. I’ve got to see the evidence. There’s nothing wrong with indicting a case and losing it, but the presumption in the indictment is that all the evidence will establish beyond a reasonable doubt that the conduct violated criminal law.”

While Trump’s tweets and other statements might have suggested an attempt to obstruct justice, his inconsistencies and stream-of-consciousness rants actually may have protected him to some extent, Taube explained.

Tweets are dashed off at odd hours – sometimes to resonate with his political base – and are not always indicative of the administration’s eventual policy, for example.

“The president is not always careful about his statements,” Taube said.

To many Trump critics, the requisite intent needed for an obstruction charge was there, at least to qualify as “high crimes and misdemeanors” if not as a violation of law.

Congress could still dig in on the obstruction issue. The pressure that Trump exerted on Comey to go easy on Flynn, combined with the president’s reported request that his director of national intelligence and National Security Agency director issue public statements saying that there was no evidence of collusion between the Trump campaign with Russia, showed intent, Asha Rangappa, a former FBI agent who teaches at Yale Law School, said in an interview recently.

“You have to look at more than just his angry tirades,” Rangappa said. “He’s been doing everything he can to undermine the investigations. A lot of his activity would support an obstruction charge in an impeachment proceeding.”

The best case against obstruction may be the completion of the Mueller report itself. Despite all the bombast, Trump didn’t derail it. – Bloomberg