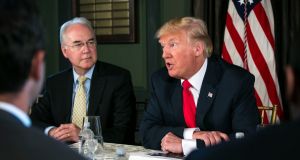 US president Donald Trump speaking during a meeting at his golf club in Bedminster, New Jersey on Tuesday at which he unleashed a surprisingly fierce attack on North Korea. Photograph: Al Drago/The New York Times

US president Donald Trump delivered his “fire and fury” threat to North Korea on Tuesday with arms folded, jaw set and eyes flitting on what appeared to be a single page of talking points set before him on the conference table at his New Jersey golf resort.

The piece of paper, as it turned out, was a fact sheet on the opioid crisis he had come to talk about, and his ominous warning to Pyongyang was entirely improvised, according to several people with direct knowledge of what unfolded. In discussions with advisers beforehand, he had not run the specific language by them.

The inflammatory words quickly escalated the confrontation with North Korea to a new, alarming level and were followed shortly by a new threat from North Korea to obliterate a US air base on Guam. In the hours since, the president’s advisers have sought to calm the situation, with secretary of state Rex Tillerson assuring Americans that they “should sleep at night” without worrying about an imminent war.

But the president’s ad-libbed threat reflected an evolving and still unsettled approach to one of the most dangerous hot spots in the world as Mr Trump and his team debate diplomatic, economic and military options. The president’s aides are divided on North Korea, as on other issues, with national security veterans like defence secretary Jim Mattis and Lt Gen HR McMaster, the national security adviser, on one side and Stephen Bannon, the president’s chief strategist, and his allies on the other.

While Gen McMaster and others consider North Korea a pre-eminent threat that requires a tough response, Mr Bannon and others in the nationalist wing argue that it is really just a subset of the administration’s conflict with China and that Mr Trump should not give more prominence to an unstable rogue operator like Kim Jong-un, North Korea’s leader.

Mr Bannon’s allies in the alt-right media and activist groups have been waging a ferocious public attack against Gen McMaster, characterising him as soft on issues like Iran, Israel and terrorism and promoting a hashtag #FireMcMaster. They are angry that Gen McMaster has pushed out several hard-liners associated with Mr Bannon from the national security council staff. Mr Trump came to Gen McMaster’s defence last week with a statement expressing confidence in him.

But in the North Korea debate, like a similar one over Afghanistan, Mr Bannon has been arguing against what his side considers the excessively militant approach of the “war party” of Gen McMaster. While Mr Bannon has his own channel to the president, he has been shut out of most formal discussions of North Korea by the national security team.

Neither camp advocated language like “fire and fury”, according to the people involved. Among those taken by surprise, they said, was John Kelly, the retired four-star Marine general who has just taken over as White House chief of staff and has been with the president at his golf club in Bedminster, New Jersey, for his working vacation.

The president had been told about a Washington Post story on North Korea’s progress in miniaturising nuclear warheads so that they could fit on top of a ballistic missile, and was in a bellicose mood, according to a person who spoke with him before he made the statement.

His team assumed that he would be asked about North Korea during a scheduled media appearance tied to his opioid meeting, but Mr Trump had not mentioned his comment during a conference call beforehand that focused on North Korea.

“North Korea best not make any more threats to the United States,” Mr Trump told reporters in remarks aired on television and broadcast around the globe. “They will be met with fire and fury like the world has never seen.”

But according to his advisers, Mr Trump has used that phrase repeatedly in private discussions about North Korea. The president had been frustrated that the media had not given more attention to his success in winning a unanimous vote by the United Nations Security Council to impose more sanctions on North Korea.

After making his public statement, Mr Trump headed into an hour-long meeting on opioids, but his national security team huddled to figure out how to proceed. Mr Tillerson became the obvious choice to calm the waters, which he did during a refuelling stop in Guam, the same island threatened by North Korea.

“I think Americans should sleep well at night, have no concerns about this particular rhetoric of the last few days,” Mr Tillerson told reporters. He added: “Nothing I have seen and nothing I know of would indicate that situation has dramatically changed in the last 24 hours.”