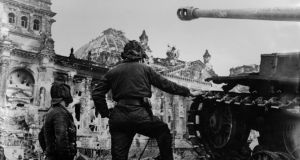 A Soviet tank faces the badly damaged Reichstag in May 1945 in Berlin, where the last pocket of German resistance was crushed. Photograph: Mark Redkin/Getty Images

In an essay in Germany’s Frankfurter Allgemeine newspaper, Dr Jones, of University College Dublin, accused Prof Gerd Krumeich of flirting with neo-Nazi thinking by reheating the century-old “stab in the back” theory.

Popular among national conservatives and co-opted by the Nazis, supporters of this theory say the first World War ended with the betrayal of Germany’s imperial army by nervous politicians, a war-weary public and “Jewish” revolutionaries in Berlin.

Given Prof Krumeich’s reputation, the Irish historian said he “should think more carefully before publicising historical events that bring applause from the wrong side”.

Dr Jones attacked the historian for arguments based on “ill-chosen quotations and grotesque misinterpretation of the work of foreign and German historians in the last 30 years”.

Contacted by The Irish Times, Prof Krumeich said the Irish historian was “clearly foaming at the mouth when he wrote that”.

Prof Krumeich, a 72-year-old emeritus of history at Düsseldorf university asked in his original FAZ article discussed the “formidable political hatred” caused by the capitulation – German left-wing readiness to accept sole war guilt and nationalist refusal to accept the military defeat – and how it poisoned the subsequent Weimar Republic and lead to the Nazi dictatorship.

Given that huge cost, he asked whether the capitulation of November 1918 was a foregone conclusion or whether a ceasefire – without capitulation and the German revolution – could have ended the war in different circumstances and put European history on a different path.

That prompted stinging attacks against him and the conservative daily, with one reader writing: “Coming up next in the FAZ: We could have won the war in 1945.”

Dr Jones dismissed the Krumeich thesis, pointing to massive German losses – more than a million killed or taken prisoner in the last four months to the capitulation – a fact known to Berlin’s enemies.

“[Krumeich] simply ignores the fact that the German army didn’t have enough soldiers to continue the war,” wrote the Irish historian.

Prof Krumeich admits he was mistaken to write that German army “could have fought on”.

“I meant, of course, they could have fought on a little longer,” he told The Irish Times.

He criticised the FAZ for illustrating his article with a Nazi-era “stab-in-the-back” illustration and said it was immaterial to him that his article had been praised in far-right circles.

“I’m a dyed-in-the-wool leftie, I have nothing to prove,” he said. The allergic reaction to his essay, he suggested, demonstrated shortcomings in the German political culture where uncomfortable historical debates are avoided, and anyone who questions the liberal consensus is “put in the far-right corner”

Contacted by The Irish Times, Dr Jones dismissed the German academic’s attempts to play down his essay’s distortions, saying “UCD undergraduates could take his essay to pieces”.

Dr Jones, an Irish Research Council fellow, added: “In the context of the rise of the far-right AfD, it is disappointing that he would lend his support to a dangerous, right-wing myth.”