Hillary Clinton called for Syrian airbases to be ‘taken out’

Hours before US strike, Trump’s election rival said Assad’s airfields should be targeted 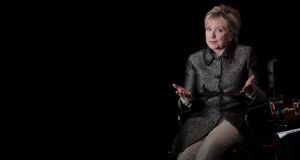 Former US secretary of state Hillary Clinton speaks during an interview with Nicholas Kristof on Thursday. Photograph: Drew Angerer/Getty Images

Speaking in her first public interview since losing the US election in November last year, Ms Clinton said Syrian president Bashar al-Assad’s aerial power had been the key component behind widespread civilian deaths since the start of the civil war in 2011.

Mr Trump launched a barrage of cruise missiles in the early hours of Friday morning on a Syrian airbase thought to be behind this week’s chemical weapons attack, which killed over 80 civilians.

Reports indicated seven people died in the US strikes and nine planes were destroyed.

Speaking at the Women in the World Summit in New York before the strikes took place, Ms Clinton said she believed the US had been wrong not to have previously launched such an offensive.

She said: “Assad had an air force, and that air force is the cause of most of the civilian deaths, as we have seen over the years and as we saw again in the last few days.”

Asked whether she now believes that failing to take a tougher stand against Syria was her worst foreign policy mistake as secretary of state under former US president Barack Obama, Ms Clinton said she favoured more aggressive action against Mr Assad.

“I think we should have been more willing to confront Assad,” Ms Clinton said in the interview.

“I really believe we should have and still should take out his air fields and prevent him from being able to use them to bomb innocent people and drop sarin gas on them.”

Ms Clinton said she had advocated for a no-fly zone in Syria after leaving government, something Mr Obama opposed.

The US government believes the chemical agent sarin was used in Tuesday’s attack.