Four people have died after an explosion destroyed a shop in the English city of Leicester. Police say there's no immediate indication the blast is linked to terrorism. Emergency services responded to the incident Sunday evening (February 25). 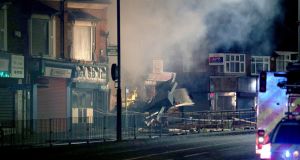 The scene on Hinckley Road in Leicester, after a ‘major incident’ was declared by police after reports of an explosion at around 7.03pm. Photograph: Aaron Chown/PA Wire

Four people have died after an explosion and fire at a building in Leicester on Sunday night.

Leicestershire Police said another four people remain in hospital following the incident, one with serious injuries.

Fire crews, paramedics and police responded to reports of an explosion at the property on Hinckley Road at about 7pm.

A “search and rescue” operation is continuing at the scene and emergency services remain at the site after fire crews worked through the night digging through rubble and battling the blaze.

Police had declared a major incident on Sunday night, and six people were taken to Leicester Royal Infirmary.

Police say an investigation will take place to establish the cause of the fire, but say there is currently no indication that it is terrorist-related.

Video taken at the scene on Hinckley Road shows flames billowing into the night sky as the fire engulfed what is believed to be a convenience store.

One clip appeared to show emergency services rushing to help someone close to flames that were visible from a distance.

The building appears to have stood next to a shop called TJ’s Takeaway.

Andrew Brodie, the assistant chief fire officer for Leicestershire Fire and Rescue Service, tweeted that conditions were “arduous” for firefighters as they worked through a “bitterly cold night”.

But he praised their “tremendous effort”.

Speaking to Sky News, Kat Pattinson, who lives on the same road as the fire, told how her “whole house shook” when the blast happened.

She added: “We checked on our children first and foremost and then we went outside.

“There is just an awful lot of smoke here at the moment and the whole area is cordoned off.”

She added that the shop on fire is usually open until about 9pm on a Sunday, and has a flat above it.

Leicestershire Fire and Rescue said it began receiving calls from concerned members of the public at 7.03pm.

A spokeswoman said six fire engines had been requested and that the affected property was a two-floor building with a loft conversion that had suffered a “pancake collapse”.

Hinckley Road was closed between the junction with Woodville Road and Westcotes Drive, while Carlisle Street was also shut.

Witness Tahir Khan said: “I was driving past when it happened.

“Loads of people were gathered and there was gas and flames coming out of the building.

“I couldn’t believe it, it was like a Hollywood movie.”

BBC journalist John Alexander said: “I live about 80 yards away from where it happened.

“I felt a tremor, what felt like an earthquake shock and I heard a very low boom that sounded like a very, very fast release of pressure.

“I thought my house was going to fall down on top of me and all my neighbours have said the same thing.

“I saw one guy get pulled out and he’ll be very lucky if he wasn’t killed.”