In a speech in London, British Prime Minister Theresa May laid out her plans for the next stage of Brexit. 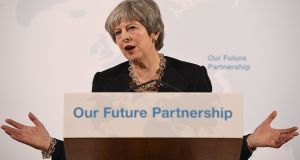 Prime minister Theresa May delivers a speech at the Mansion House in London on the UK’s economic partnership with the EU after Brexit on Friday. Photograph: Leon Neal/PA Wire

Theresa May has admitted that Britain will enjoy less access to European markets after Brexit but that it will continue to be affected by EU regulations and rulings from the European Court of Justice (ECJ). Speaking to business figures, politicians and European diplomats at the Mansion House in London, the prime minister said it was time to face up to some hard facts about leaving the EU.

“We are leaving the single market. Life is going to be different. In certain ways, our access to each other’s markets will be less than it is now. How could the EU’s structure of rights and obligations be sustained, if the UK – or any country – were allowed to enjoy all the benefits without all of the obligations? So we need to strike a new balance. But we will not accept the rights of Canada and the obligations of Norway,” she said.

The contents of Ms May’s speech were approved in advance by her cabinet and she reassured Brexiteers that she would hold firm to her commitment to leave the single market, the customs union and the jurisdiction of the ECJ. She acknowledged, however, that Britain would not fully escape the court’s reach after it leaves the EU.

“For a start, the ECJ determines whether agreements the EU has struck are legal under the EU’s own law – as the US found when the ECJ declared the Safe Harbor Framework for data sharing invalid,” she said.

“And if, as part of our future partnership, parliament passes an identical law to an EU law, it may make sense for our courts to look at the appropriate ECJ judgments so that we both interpret those laws consistently.”

Rejecting an “off the shelf” trade deal with the EU based on the Norway or Canada models, Ms May said Britain was prepared to keep its regulatory regime close to the EU’s and to make binding commitments as part of a “unique and unprecedented” partnership. She offered to pay for associate membership of the European Medicines Agency, the European Chemicals Agency, and the European Aviation Safety Agency and to accept the ECJ’s jurisdiction over them.

“Parliament would remain ultimately sovereign. It could decide not to accept these rules, but with consequences for our membership of the relevant agency and linked market access rights,” she said.

The prime minister rejected membership of a customs union with the EU, which Labour now supports, but claimed that proposals her government put forward last year could form the basis of a new customs partnership.

The initial reaction from both Brexiteers and pro-Europeans in the Conservative party was positive but Labour leader Jeremy Corbyn said she had once again failed to clarify what the government was looking for from Brexit.

“After 20 wasted months, Theresa May has once again failed to bring real clarity to the negotiations – and worryingly, she admitted that her approach will reduce our access to European markets. She read out a long list of problems but failed to provide solutions, particularly on the urgent question of preventing a hard border in Northern Ireland, ” he said.

Mr Corbyn also criticised the prime minister’s suggestion that, as part of a free trade agreement, Britain could make a binding commitment to continue to adhere to EU rules on competition and state aid.

“Theresa May’s only clear priority today seemed to be to tie the UK permanently to EU rules which are used to drive privatisation and block support for British industry,” he said.