Civilians of eastern Ghouta are hostages to ambitions of both sides 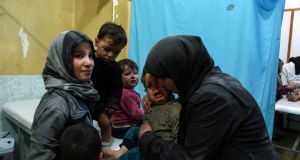 A Syrian woman in a make-shift clinic following reported regime bombardment, in the rebel-held town of Douma, in the eastern Ghouta region. Photograph: Hamza Al-Ajweh/AFP/Getty Images

Neither the Syrian government nor jihadis holding eastern Ghouta are prepared to abide by the countrywide ceasefire demanded by the UN Security Council or the five-hour pause in hostilities proposed by Russia.

Although there has been a lull in Syrian air strikes on the area and jihadi mortars on Damascus, civilians have had little respite from violence.

As the war between the Syrian army and insurgents enters the endgame, the government cannot afford to cede indefinitely eastern Ghouta, a countryside area of towns and villages, while jihadis remain determined to hang on to their last redoubt adjacent to the capital.

They have held this area since 2013, fought each other for dominance and territory, received salaries and arms from external sponsors – Saudi Arabia, Qatar and Turkey – and levied taxes on food, medical supplies and other goods entering the area.

The jihadis also do not want to abandon the very effective media operation providing news about the very real and dire humanitarian tragedy.

Civilian residents of eastern Ghouta, once Damascus’s market garden, remain hostages to the ambitions of both sides. Since Russia’s limited ceasefire came into effect on Tuesday, ambulances and buses dispatched by the authorities have waited at the entrance to a designated humanitarian corridor for wounded civilians and evacuees to arrive, but none came.

Instead, jihadi mortars slammed into the roadside nearby. The insurgents cannot permit civilians to depart. Speaking on Tuesday’s France 24 satellite channel debate, Gen Dominique Trinquand, ex-chief of France’s military mission to the UN, said civilians are “weapons” used to “put pressure” on Damascus, an effort which the government cannot tolerate.

While jihadi spokesmen contend that men face arrest or army conscription if they leave, the four main jihadi factions based in eastern Ghouta – Jaish al-Islam (Army of Islam), Faylaq al-Rahman (Legion of Rahman), Ahrar al-Sham (Freemen of the Levant) and al-Qaeda’s Tahrir al-Sham (Liberation of the Levant) – use force to prevent civilians from departing. Were an evacuation to begin safely and accelerate, thousands could go, leaving fighters without civilian cover.

This happened when civilians streamed out of eastern Aleppo in late 2016 and fighters were compelled to withdraw to the northwest Idlib province which, like eastern Ghouta, is now under attack by government forces.

Humanitarian agencies’ demands for a full ceasefire and access to areas under siege serve the insurgents’ agenda, which is to preserve their grip on territory for as long as possible.

Consequently, Russia has proposed limited daily ceasefires, which could provide access if these agencies agreed to risk deliveries and evacuations while Damascus and Moscow maintain military pressure on the jihadis, with the aim of compelling them to surrender or leave.