US Senate acquits Trump of both impeachment charges 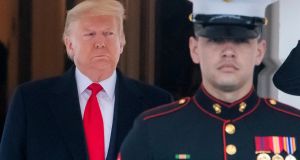 US president Donald Trump waits behind a US marine to greet visitors to the White House on February 5th, 2020. Photograph: Erik S. Lesser/EPA

US president Donald Trump has been acquitted in his impeachment trial, as the US Senate rejected two articles of impeachment on Wednesday.

The 100-member senate voted by 50 to 48 against impeachment, falling well short of the two-third majority needed to remove him from office.

Only one Republican – Mitt Romney of Utah – voted to convict the president on one of the charges – abuse of power – telling the senate that the US president was “guilty of an appalling abuse of public trust.”

Citing his religious faith, he said that Mr Trump’s actions were “a flagrant assault on our electoral rights, our national security and our fundamental values.”

Mr Romney, who was the Republican party’s presidential candidate in 2012 was immediately denounced by the Republican establishment, including his niece, the chair of the Republican National Committee, who tweeted: “I, along with the GOP [Republican Party] stand with President Trump.” Mr Trump’s re-election campaign spokesman blasted Romney as “an irrelevant relic.”

Mr Trump shared a tweet shortly after the vote with mock campaign posters showing him campaigning in forthcoming elections indefinitely, culminating with a sign “Trump4EVA”.

Despite suggestions that some Democrats in Trump-friendly areas would side with Republicans, all 47 senate Democrats voted to remove Mr Trump from office, in a show of unity on the Democratic side.

Doug Jones of Alabama said that “after many sleepless nights,” he had reluctantly concluded that “the evidence is sufficient to convict the president for both abuse of power and obstruction of Congress.”

Speaking on the senate floor ahead of the vote, senate minority leader Chuck Schumer accused Republicans of looking “the other way” when it came to Mr Trump’s behaviour.

“I direct my final message to the American people – don’t lose hope, there is justice in this world and truth and right – I believe that.”

The vote brought to the end the quickest senate trial in history, with the entire process lasting just under three weeks. It was also the only trial not to hear from witnesses, after the Republican-controlled senate voted last Friday not to subpoena witnesses or documents despite calls from Democrats to allow a full trial.

Mr Trump became only the third president in US history to be impeached when the Democratically-controlled House of Representatives charged him with two articles of impeachment in December over his dealings with Ukraine.

But the outcome of the trial was never in doubt, given that a two-third majority was needed in the senate to convict him.

Unlike previous impeachments, Mr Trump’s trial took place in an election year, and concluded just nine months before Americans go to the polls in the presidential election.

Hailing what he called “the great American comeback” and a “blue-collar boom,” his speech set out his economic achievements, as he claimed he was building “the world’s most prosperous and inclusive society.”

But the event was overshadowed by tensions between Mr Trump and House Speaker Nancy Pelosi. As the president entered the chamber shortly after 9 pm, he was swamped by well-wishers and Republican members clambering to shake his hand. House Speaker Nancy Pelosi appeared to offer her hand as he approached the dais, but Mr Trump turned away as he handed her a copy of his speech. As he concluded his address 90 minutes later, she slowly and deliberately tore up her copy of the speech.

Mr Trump used his speech to set out his achievements in office, avoiding any mention of the ongoing impeachment trial which was expected to conclude on Wednesday. He also referenced the recent agreement on a revised NAFTA deal – the North American trade agreement between the United States, Mexico and Canada - as well as the signing of a “phase one” agreement with China.

“For decades, China has taken advantage of the United States. Now we have changed that but, at the same time, we have perhaps the best relationship we’ve ever had with China, including with President Xi,” he said. “They respect what we have done because, quite frankly, they could never really believe what they were able to get away with what they were doing year after year, decade after decade.”

The speech also hit on themes such as criminal justice and national security, outlining the administration’s $2.2 trillion investment in the US military. He claimed that the United States’ allies were now “paying their fair share” to Nato.

Unsurprisingly, immigration was a theme, with Mr Trump noting that 100 miles of his proposed border wall with Mexico had been completed, and that more than 500 wiles of wall would be finished by early next year. As in previous years, Mr Trump cited examples of illegal immigrants who had committed crimes in the United States, criticising “sanctuary cities” and states like California which offer protections to undocumented immigrants. The United States of America should be a sanctuary for law-abiding Americans, not criminal aliens,” he said to applause from Republicans.

He accused Democrats of trying to attempt a “socialist takeover” of healthcare, as he promised to tackle the opioid crisis.

As his speech continued, he touched on cultural issues such as religion, abortion and gun rights. Noting the high number of conservative judges appointed during his presidency, he name checked Supreme Court justices Neil Gorsuch and Brett Kavanaugh who were present in the chamber.

He called on Congress to pass legislation banning late-term abortion. “Whether we are Republican, Democrat, or Independent, surely we must all agree that every human life is a sacred gift from God,” he said.

He also claimed that Americans’ gun rights were “under siege all across our country.”

“As long as I am president I will always protect your Second Amendment right to keep and bear arms,” he said, a comment that provoked an outburst from one spectator in the gallery who was then escorted out of the chamber.

1 Covid-19: One death and 363 further cases confirmed in State
2 US election: Everything you need to know about Tuesday’s presidential debate
3 Ireland will not be Brexit ‘collateral damage’, says Coveney in Washington
4 ‘Insane’ gathering of hundreds of students in Galway condemned
5 Prepare for six to nine months of Covid-19 restraints, warn health officials
Real news has value SUBSCRIBE