Four dead after siege at US veterans home in California 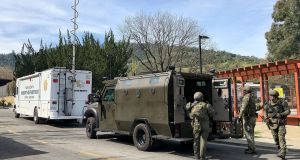 Law enforcement members near the Veterans Home of California in Yountville, where a gunman took hostages. Photograph: JL Sousa/Napa Valley Register via AP

Details emerged on Saturday about a former US serviceman who took three women hostage at a California veterans home where he had undergone treatment for PTSD, in a standoff that ended when police found him and his captives dead.

The Veterans Home of California in Yountville, the largest such facility in the US, was the scene on Friday of the latest mass shooting to rock a country already reeling from the slaughter last month of 17 people at a Florida high school.

Officials named the gunman as Albert Wong (36), of Sacramento, and the Associated Press (AP) reported that he had served with the US army on active duty from May 2010 to August 2013, spending a year in Afghanistan.

He received four medals, including an Afghanistan campaign medal, and was awarded an expert marksmanship badge, the AP said.

Wong had been a patient of Pathway Home, a programme at the Yountville complex for former service members suffering post-traumatic stress disorder after deployments in Iraq and Afghanistan.

The San Francisco Chronicle, citing unnamed sources, said he had been asked to leave the programme two weeks ago.

“We are deeply saddened by the tragic situation in Yountville and mourn the loss of three incredible women who cared for our Veterans,” US president Donald Trump said on Saturday on Twitter.

The incident, which began at about 10.30am local time on Friday at the sprawling facility in the heart of Napa Valley’s wine country, some 100km north of San Francisco, ended almost eight hours later.

According to Larry Kamer, the husband of one of the Pathway Home administrators, Wong walked into the programme’s building carrying a rifle during a going-away party for one of the employees.

Kamer, who volunteers at the home, said his wife told him by phone during the siege that the gunman had let her and three other women leave the room where the party was taking place, but that he kept three female employees behind as hostages.

“These brave women were accomplished professionals, dedicated to their careers of serving our nation’s veterans, working closely with those of the greatest need of attention,” Pathway Home said in a statement.

Despite repeated efforts by police negotiators to communicate with Wong throughout the day, authorities said they had failed to make contact with the gunman after he exchanged gunfire with a sheriff’s deputy at the start of the standoff.

Officers who eventually entered the room where the hostages were being held found all four bodies there, police said. No details were immediately given about how the four died.

James Musson, a 75-year-old army veteran and resident of the facility, told Reuters many who lived there voiced concerns about lax security, saying visitors could walk in and out without restriction and that public safety officers were not armed.

The siege came less than a month after a former student killed 17 people at a Florida high school using an assault-style rifle. That massacre in the Fort Lauderdale suburb of Parkland sparked a student-led drive for new restrictions on gun sales to curb the mass shootings that have occurred with frightening frequency in the US in recent years. – Reuters