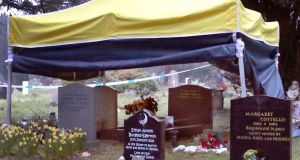 A tent erected at the London Road Cemetery in Salisbury, England, over the grave of Liudmila Skripal, the wife of former Russian double agent Sergei Skripal. Photograph: PA Wire 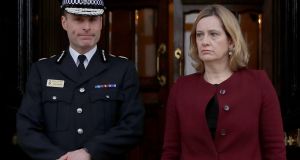 British police have identified more than 200 witnesses and are looking at more than 240 pieces of evidence in their investigation into a nerve agent attack on a Russian ex-spy and his daughter, UK interior minister Amber Rudd said on Saturday.

Ms Rudd told reporters after chairing a meeting of the government’s Cobra security committee that more than 250 counter-terrorism police were involved in the investigation, which was proceeding with “speed and professionalism”.

Former double agent Sergei Skripal (66) and his daughter Yulia (33) have been in hospital in a critical condition since Sunday, when they were found unconscious on a bench in the southern English cathedral city of Salisbury.

Ms Rudd confirmed on Saturday that the two remain in a critical but stable condition.

Nick Bailey, a police officer who fell ill after being part of the early response to the attack, remains seriously ill but is talking and engaging with his family, Ms Rudd also said.

Ms Rudd’s comments came as Mr Bailey released a statement from hospital saying “he does not consider himself a hero” and was “merely doing his job”.

Investigators had been summoned to the meeting at 3pm for emergency talks on the incident.

About 180 troops, including Royal Marines, RAF Regiment troops and chemical warfare specialists, are understood to have been deployed in the city on Friday after Scotland Yard requested specialist help.

A defence spokesman said armed forces personnel would return to Salisbury in similar numbers on Saturday as the cleanup operation continued.

Police turned their attention on Friday to the cemetery where Mr Skripal’s wife and son were laid to rest.

Officers in hazmat suits were seen placing a blue forensic tent over his son’s memorial stone before appearing to stuff items in several yellow barrels. His son, Alexander, was cremated last year.

The grave of Mr Skripal’s wife Liudmila, who was buried in 2012, was also cordoned off at the London Road Cemetery.

Apparent fears of chemical contamination have also seen Mr Skripal’s home cordoned off while detectives attempt to pin down the origins of the substance used to incapacitate him.

A short distance away, a convoy of military vehicles rolled into the car park at Salisbury District Hospital to recover a police car.

Suspicion is mounting that Russia carried out the attempt on Mr Skripal’s life as an act of revenge against the former intelligence officer, who was convicted in Russia in 2006 of selling state secrets to MI6.

He was later released as part of a spy swap with the US.

The Kremlin denies responsibility and British ministers have urged caution over apportioning blame until the facts become clear.

Defence minister Tobias Ellwood said the military’s presence reflected the “seriousness” of the situation, adding: “We mustn’t get ahead of ourselves but we must have a robust response and it’s something that we’ll be discussing with our Nato partners and with the forthcoming summit in Brussels in July.

“Some big questions arise as to how do you stand up to a clandestine and sinister attack deliberately done to play havoc in our society?”

Meanwhile, Salisbury’s Tory MP John Glen, also a British government minister, attempted to reassure his constituents that a “whole range of tools are at our disposal” once it was established who was behind the incident.

“The government will not be acting precipitously in response to what has happened. Now is the time for cool heads and a rational examination of the facts,” he said.

“Once these are established, then and only then will an appropriate and proportionate course of action be taken. A whole range of tools are at our disposal depending on who has perpetrated this act, including a number of financial and economic levers.”

Ms Rudd had earlier visited Salisbury and the hospital where Mr Bailey is receiving treatment.

He said: “There obviously are some indications the officer, and I’m very sorry that he has been injured, has actually been to the house, whereas there was a doctor who looked after the patients in the open who hasn’t been affected at all.

“So there may be some clues floating around in here.”

Police said 21 people had been seen for medical treatment since the incident.

The figure includes members of the public and emergency staff, some of whom have had blood tests.

The attack is being treated as attempted murder.

1 How one couple’s weekend away resulted in 30 Covid-19 cases
2 Miriam Lord: Government’s latest comedy of errors offers little to laugh about
3 Taoiseach tells TD to ‘cop on’ over criticism of contact tracers asking about pubs
4 Coronavirus: 429 new cases as vigilance urged amid rises across the country
5 Leaving Cert: 6,500 students awarded lower grade due to code errors
Real news has value SUBSCRIBE