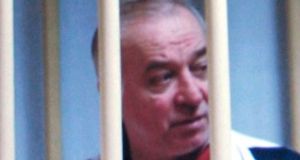 One of the two people critically ill in hospital in England after “suspected exposure to an unknown substance” is a Russian man who was exchanged in a high-profile “spy swap” in 2010, it is understood.

Sergei Skripal (66), was one of four Russians exchanged for 10 deep cover “sleeper” agents planted by Moscow in the US.

Wiltshire police said that a man in his 60s and a woman in her 30s were found unconscious on a bench in the Maltings shopping centre in Salisbury on Sunday afternoon.

Temporary assistant chief constable Craig Holden said: “The pair, who we believe are known to each other, did not have any visible injuries and were taken to Salisbury district hospital. They are currently being treated for suspected exposure to an unknown substance. Both are currently in a critical condition in intensive care.

“Because we are still at the very early stages of the investigation, we are unable to ascertain whether or not a crime has taken place. A major incident has been declared today and a multi-agency response has been co-ordinated.

“Alongside our partner agencies, we are conducting some extensive enquiries to determine exactly what led to these two people falling unconscious and clarify whether or not any criminal activity has happened.”

Mr Skripal’s sudden and unexplained illness will invite comparisons with the poisoning in 2006 of another Russian spy, Alexander Litvinenko.

Litvinenko – a former officer with the FSB spy agency – fell ill after drinking a cup of tea laced with radioactive polonium. He met his killers on November 1st 2006, in a ground-floor bar of the Millennium hotel in Mayfair, central London.

The pair were Andrei Lugovoi – a former KGB officer turned businessman, who is now a deputy in Russia’s state Duma – and Dmitry Kovtun, a childhood friend of Lugovoi’s from a Soviet military family.

Litvinenko’s murder caused international scandal and led to years of estrangement between Moscow and London. Russian president Vladimir Putin denied all involvement and refused to extradite either of the killers from Moscow.

A painstaking investigation by Scotland Yard revealed that the assassins took three attempts to kill Litvinenko, with two botched plots the previous month. They eventually succeeded by putting a tiny amount of polonium-210 in a teapot. Litvinenko drank only three or four sips and died in agony 23 days later.

Detectives were able to reconstruct the killers’ movements across London – after discovering radioactive traces in hotels, restaurants and a nightclub in Soho. the killers disposed of excess polonium by pouring it down the u-bend of their hotel sink.

Christopher Steele – then a senior MI6 officer and the subsequent author of the a controversial dossier concerning Donald Trump and alleged ties with Russia – led an inquiry by government into the killing. He swiftly concluded that the Kremlin was behind the assassination. Only Russia had the capacity to produce polonium, which can only be obtained from a nuclear reactor.

A public inquiry in 2015 and 2016 heard five months of evidence, including secret submissions from UK spy agencies. Its chairman, Sir Robert Owen, concluded that the FSB had murdered Litvinenko, assigning Lugovoi and Kovtun to carry out the mission.

Owen also ruled that Vladimir Putin had “probably approved” the operation, together with the FSB’s then chief Nikolai Patrushev.

One person involved in the case, and other incidents of Russian espionage, said: “Given that Putin has done it once, and effectively got away with it, what’s to stop him from doing it again? We don’t have details yet but this case seems similarly brazen.” – Guardian

1 How one couple’s weekend away resulted in 30 Covid-19 cases
2 Covid-19: College students having break and middle-aged people in rural pub linked to large clusters
3 Taoiseach tells TD to ‘cop on’ over criticism of contact tracers asking about pubs
4 Leaving Cert Q&A: How did the errors happen and will students get new CAO offers?
5 Miriam Lord: Government’s latest comedy of errors offers little to laugh about
Real news has value SUBSCRIBE