US president will meet Kim Jong-un only if certain steps are taken, says White House 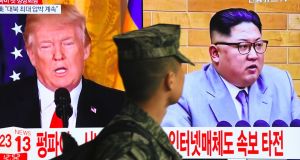 The proposed meeting between US president Donald Trump and North Korean leader Kim Jong-un will not take place unless the United States sees “concrete and verifiable actions from North Korea”, the White House said on Friday.

Addressing reporters following the shock announcement that the US president has accepted an invitation by Mr Kim to meet, press secretary Sarah Sanders said that the meeting would only take place if certain steps were taken by North Korea.

“The president will not have the meeting before he sees concrete steps and concrete actions,” she said. Asked if it was possible that the meeting might not take place, she said: “There are a lot of things possible . . . but I can tell you that the president has accepted [the] invitation on the basis that we have concrete and verifiable results.”

Ms Sanders did not specify what steps were required of the North Koreans, but she said they had “promised to denuclearise, they have promised to stop nuclear and missile testing, and they’ve recognised that we’re going to continue in our military exercises”.

Asked how the process of denuclearisation would be verified, she said that was a matter for the US intelligence and national security communities. “That is going to be a major part on any conversation,” she said.

She said that no date or location had been chosen for the proposed meeting, despite the fact that the South Korean national security adviser, Chung Eui-yong, said that Mr Trump would meet the North Korean leader by May.

Mr Chung made the surprise announcement outside the White House on Thursday evening, following a meeting with Mr Trump and senior officials.

The White House confirmed shortly afterwards that Mr Trump had accepted the invitation, with Mr Trump tweeting: “Great progress being made but sanctions will remain until an agreement is reached. Meeting being planned!”

Mr Trump’s decision to accept the invitation represents a remarkable turnaround for the US president, who has engaged in a war of words with the North Korean dictator, whom he has dubbed as “little Rocket Man”. The 34-year-old North Korean leader has hit back with jibes, calling Mr Trump “a mentally deranged US dotard”.

Relations between the two countries reached a historic low last year, after Pyongyang fired several intercontinental ballistic missiles and tested what was widely believed to have been a hydrogen bomb. But hopes of a detente have emerged in recent weeks following the Winter Olympics in South Korea, which were attended by a delegation from North Korea, including the sister of Kim Jong-un.

As the world responded with cautious optimism and some bewilderment at the announcement on Thursday, most Republicans tentatively welcomed the move. Senator Lindsey Graham of South Carolina said the proposed meeting represented the “best hope in decades to resolve this threat peacefully” and warned North Korea not to “play” Mr Trump.

The White House on Friday rejected suggestions that North Korea had not conceded any ground and yet had secured a meeting with the US president.

“The United States has made zero concessions but North Korea has made some promises,” Ms Sanders said, noting Pyongyang’s promise to denuclearise and discontinue nuclear testing.

1 Harry and Meghan will no longer be working members of British royal family
2 Mary Lou has to call for the smelling salts as SF councillor deals a knock-out blow
3 Peter Casey on the campaign trail: ‘My ideal job would be minister for health’
4 Victim stabbed 28 times has told court he lied to a jury last year
5 Dublin gangland figures involved in Drogheda feud that killed 17-year-old
Real news has value SUBSCRIBE