America is home to many brave people, but it's no longer the land of the free

Why are decent, hard-working people being chased out of the country they call home? 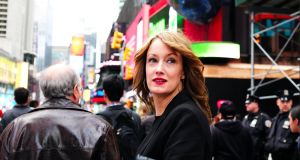 Lisa Tierney-Keogh: ‘I have encountered more opportunity, more chances to pursue my dreams in the US than I’ve had anywhere else I’ve travelled to.’ Photograph: Maribel de la Torre

The final line of the US national anthem, The Star Spangled Banner, goes “O’er the land of the free and the home of the brave”. There is an intense pride felt about this anthem, and it is, in my humble opinion, a very beautiful song.

While there are a great many brave people here, not everyone in America is free. It is, and always has been, a very unequal society. And yet people come in droves, in search of better lives, in pursuit of their dreams. Some are brought as children, unaware, unknowing. Some arrive and just don’t leave. They build lives, pay taxes, raise families. Some enter illegally, fleeing persecution or certain death in their home country.

There are myriad reasons why human beings are so attracted to America, despite its history of hostility towards immigrants.

Although it is a disputed figure, it is estimated that there are around 50,000 undocumented Irish in the US, and more than 11 million undocumented immigrants in total. There are almost two million so-called DREAMERS, immigrants brought to the US when they were children. President Donald Trump and his collaborators are determined to rid the US of as many undocumented immigrants as they can, and stop others from coming because, you know, none of their ancestors were immigrants.

There is a real and genuine fear of “the other” in this country. What some might regard as a rich tapestry of human representation, others see as a threat to their power. The solution to this fear seems to be discriminate and exclude. Keep them down and keep them out. Stoke fear among Fox News watchers and people who don’t want to believe that most immigrants to the United States are not, in fact, rapists or murderers or criminals. Most are decent human beings trying to give themselves a better shot at life.

Gang violence in parts of Honduras, Guatemala, El Salvador and Mexico can be so bad that risking an illegal border crossing into the US is the only option. Remaining at home can be a death sentence. When you’ve already lost everything, you don’t have much choice but to venture towards America. Families decimated by unstable economies are forced to make the heartbreaking decision to split up and enter without papers.

But Donald Trump, his advisors and his voters don’t care about that. They care about keeping the borders “safe”. In other words, they want less brown people in their country.

One of America’s core values is purportedly equality. It’s right there in the Declaration of Independence. The hypocrisy of how this ideal is flagrantly disrespected every day is sickening.

As I write, lives hang in the balance as politicians play a game of Power Grab to see who can gain more political ground with immigration in the wake of a government shut-down last weekend. Trump wants a wall, and by hook and crooked crook, he’ll do everything he can to get it. Maybe the wall is to keep bad guys out. Or maybe it’s to keep them in.

Forget for a minute that almost every American’s family came from some place else and reflect on the deceit, on the cowardice of hiding behind “American values” because you are so afraid to lose power and have more people of colour in your country. It’s despicable. And it’s morally wrong.

I have encountered more opportunity, more chances to pursue my dreams in the US than I’ve had anywhere else I’ve travelled to. I’ve been in rooms with people so accomplished and talented I’ve had to pinch myself. I have experienced things that simply wouldn’t be possible elsewhere. I got to meet Meryl Streep for crying out loud. Why shouldn’t everyone else be afforded these chances?

Why shouldn’t every child brought here by their parents from another country have the opportunity to continue their studies and build lives and contribute to a society they care so deeply about? Why shouldn’t every Irish person living undocumented in the US have a shot at being part of the same success stories all those Irish-American politicians got because their families emigrated? Why are decent, loving, hard-working people being chased out of the country they call home?

Compassion is the answer. The sheer absence of it. It takes a cold, empty heart to see families being torn apart or traumatised refugees being sent back to absolute hell and say “yeah, let’s do more of that”. Greed for power and fear of others fills the space in the hearts where compassion should sit.

America has so many things and yet it lacks the one thing that humanity needs to fully thrive. And so this country will not be at peace in itself until it resolves the pain at the heart of slavery, attacking immigrants, and eroding the rights of those with less power.

The next time The Star Spangled Banner plays, it will ring through my head tinged with sadness, because despite the bravery of those who call America home, this isn’t the land of the free. And this beautiful, precious song will lose its magic.

Lisa Tierney-Keogh is a playwright and co-founder of Irish Stand @IrishStand, a grassroots movement standing for justice, truth and equality. She tweets @lisatk

Are you a non-lying cheat or just radically dishonest?
Real news has value SUBSCRIBE