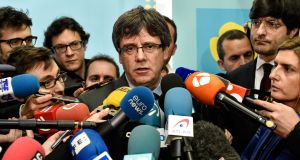 Carles Puigdemont: Madrid fears the politician may sneak across the border with France “in a helicopter, in a boat or in the boot of a car”. Photograph: John Thys/AFP/Getty

Catalonia’s parliament is due to debate on Tuesday the candidacy of Carles Puigdemont as the region’s president, but uncertainty surrounding his scheduled investiture has highlighted divisions within the independence movement and put the Spanish government’s handling of the situation under scrutiny.

Puigdemont has been formally presented as the candidate to lead a new Catalan government, following a regional election in December. Although His Together for Catalonia (JxCat) coalition did not win, it can form a narrow majority in the 135-seat parliament with the support of two other pro-independence parties.

However, with Puigdemont in self-imposed exile in Belgium and facing almost certain arrest if he returns due to his role in last year’s failed secession drive, Tuesday’s investiture debate might not even take place.

On Saturday, the constitutional court ruled against Puigdemont’s mooted plan to become president from afar, stating that the procedure “cannot be staged via video link or through a substitute parliamentarian”. The candidate, the court said, must be present in the chamber, having received judicial authorisation to take part in the ceremony.

Amid fears that Puigdemont was planning a dramatic secret return to Barcelona for the investiture, interior minister Juan Ignacio Zoido announced last week that he had boosted police security on the Catalan border with France to make sure the politician did not sneak across “in a helicopter, in a boat or in the boot of a car”.

On Monday, Puigdemont’s lawyer, Jaume Alonso-Cuevillas, refused to rule out the possibility of his client somehow attending parliament on Tuesday. Puigdemont himself wrote to the new Catalan parliamentary speaker, Roger Torrent, asking him for protection from arrest and to hold the investiture session as scheduled.

If he does not appear in person, Puigdemont might push ahead with his candidacy from afar, insisting on his democratic right to be voted in as president. That option would defy the judiciary and deepen the stand-off, as well as extending the direct rule introduced by Madrid in October, when Puigdemont was ousted as president. Such a scenario would be likely to lead to a new election in the spring.

Alternatively, Puigdemont could step aside and allow another pro-independence candidate who does not face legal action to take his place and form a government.

“Right now, Puigdemont is more of a problem than a solution,” said political analyst Jordi Casas, who pointed to growing tensions within the independence movement caused by the candidate’s uncompromising stance.

On Sunday, Joan Tardà, a congressman of the Catalan Republican Left (ERC), which has so far supported Puigdemont’s claim to become president, suggested that backing is wavering.

“If it’s absolutely necessary to form a government, if we have to sacrifice president Puigdemont, then we’ll have to sacrifice him,” Tardà told La Vanguardia newspaper. ERC spokesman Sergi Sabrià and politicians close to Puigdemont swiftly contradicted Tardà, highlighting the apparent rift within the secessionist movement on the issue.

Meanwhile, the Spanish government has been widely criticised for its apparently confused handling of the situation. Last week, it asked the constitutional court to block the investiture session pre-emptively, just hours after prime minister Mariano Rajoy had ruled out such a move and despite judicial advice to the contrary. By Monday evening, a reportedly divided constitutional court had still not made its ruling on that request, despite having met for several hours over the weekend.

The opposition Socialist Party described the government’s handling of the investiture crisis as “clumsy” and El Mundo newspaper published an inside view that depicted Rajoy’s inner circle as being gripped by panic.

However, his governing Popular Party (PP) remains adamant its strategy will pay off. “Puigdemont may keep being a prisoner or a fugitive from justice, but he will never be president of Catalonia,” said the party’s spokesman, Pablo Casado.