Sports commentator dropped for having same name as Confederate general 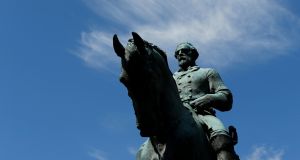 The statue in Emancipation Park, Charlottesville, of the Confederate general Robert E Lee – not to be confused with the sports broadcaster Robert Lee. Photograph: Jonathan Ernst/Reuters

The US sports station ESPN has removed a commentator from its broadcast of the University of Virginia’s first football game next month because he has the same name as a Confederate general memorialised in statues that are being taken down across the country.

The network announced late on Tuesday that the broadcaster, Robert Lee, a part-time employee who commentates on about a dozen college football games a year for ESPN, would no longer participate in the coverage of the September 2nd game in Charlottesville, Virginia, which became the centre of violent clashes this month during a white supremacist gathering.

White nationalists and neo-Nazis flooded into Charlottesville, marching through the University of Virginia campus with torches, to protest againstthe city’s plan to remove a statue of the Confederacy’s top general, Robert E Lee.

After the violence in Charlottesville, which left one person dead, ESPN executives and Lee decided that for his safety it would be best to have him to work on a different game that Saturday, a network spokesman said.

FYI: here is the Confederate General Robert Lee that ESPN has to "protect" its declining number of viewers from: pic.twitter.com/rEr8pIJIAP

There's no way ESPN pulled an Asian commentator from a broadcast because his name is Robert Lee, right? There's no way this can be true.

“We collectively made the decision with Robert to switch games as the tragic events in Charlottesville were unfolding, simply because of the coincidence of his name,” ESPN said in a statement. “In that moment it felt right to all parties. It’s a shame that this is even a topic of conversation and we regret that who calls play-by-play for a football game has become an issue.”

Lee did not return a call seeking comment. The website Outkick the Coverage reported on Lee’s removal on Tuesday afternoon. Before the demonstrations in Charlottesville, ESPN had planned for Lee to be in the commentator’s booth for the Virginia Cavaliers’ first game of the season, against the College of William and Mary, which will be broadcast on the ACC Network.

Lee will instead commentate on Youngstown State’s game against the University of Pittsburgh, which will appear on the same network.

Lee, whose full-time job is at a payroll services company in Albany, New York, started commentating on games for ESPN and its other networks last autumn, according to his LinkedIn page. For the past 17 years, he has also commentated on men’s basketball games for Siena College in Albany. He graduated from Syracuse University in 1999 with a degree in broadcast journalism.

The move by ESPN drew swift condemnation online, from people who called the decision absurd and said it was political correctness run amok.