US president Donald Trump opened the door to an increase in US troops in Afghanistan as part of a retooled strategy for the region, overcoming his own doubts about America's longest war and vowing, 'a fight to win.' 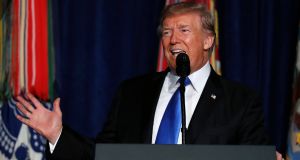 US president Donald Trump has committed the United States to an open-ended conflict in Afghanistan. Photograph: Carolyn Kaster/AP

Nato allies on Tuesday welcomed US president Donald Trump’s decision to commit more forces to Afghanistan, as part of a new US strategy he said would require more troops and funding from America’s partners.

Having run for the White House last year on a pledge to withdraw swiftly from Afghanistan, Trump reversed course on Monday and promised a stepped-up military campaign against Taliban insurgents, saying: “Our troops will fight to win”.

US officials said he had signed off on plans to send about 4,000 more US troops to add to the roughly 8,400 now deployed in Afghanistan.

However, his speech did not define benchmarks for successfully ending the war that began with the US-led invasion of Afghanistan in 2001, and which he acknowledged had required an “extraordinary sacrifice of blood and treasure”.

“We will ask our Nato allies and global partners to support our new strategy, with additional troops and funding increases in line with our own.

“We are confident they will,” Trump said.

That comment signalled he would further increase pressure on US partners who have already been jolted by his repeated demands to step up their contributions to Nato and his description of the alliance as “obsolete” - even though, since taking office, he has said this is no longer the case.

“Nato remains fully committed to Afghanistan and I am looking forward to discussing the way ahead with (defence) secretary (James) Mattis and our Allies and international partners.”

Nato has 12,000 troops in Afghanistan, and 15 countries have pledged more, Stoltenberg said.

“In my call with Secretary Mattis yesterday we agreed that despite the challenges, we have to stay the course in Afghanistan to help build up its fragile democracy and reduce the terrorist threat to the West,” UK secretary of state for defence Michael Fallon said.

Germany, which has borne the brunt of Trump’s criticism over the scale of its defence spending, also welcomed the new US plan.

“Our continued commitment is necessary on the path to stabilising the country,” a government spokeswoman said.

In June, European allies had already pledged more troops but had not given details on numbers, waiting for the Trump administration to outline its strategy for the region.

Nearly 16 years after the US-led invasion - a response to the September 11th attacks which were planned by al Qaeda leader Osama bin Laden from Afghanistan - the country is still struggling with weak central government and a Taliban insurgency.

Trump said he shared the frustration of the American people who were “weary of war without victory,” but a hasty withdrawal would create a vacuum for groups like Islamic State and al Qaeda to fill.