‘This could be my son.’ Republican women get behind Brett Kavanaugh 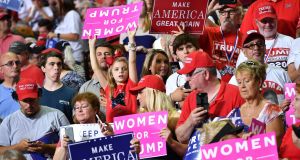 Supporters of Donald Trump, some with “Women for Trump” placards, attend a rally given by the US president in Mississippi on Tuesday. Photograph: Mandel Ngan/AFP/Getty Images

Karen Swartz watched Brett Kavanaugh’s supreme court hearing and wept - not for the woman who accused the judge of a sexual assault that has haunted her for decades, but for Kavanaugh.

Swartz (58), the Republican deputy mayor of Chatham Township, an affluent New Jersey community that is a 40-minute train ride from Manhattan, cried for a fellow Catholic whose faith, she believed, was mocked by a sneering media.

She also wept for a man who had achieved the kind of professional success she hoped to see from her 23-year-old son, a recent university graduate. “Who would want to see his meteoric ascent torpedoed by an unfounded allegation?” she asked.

Swartz’s sympathy for Kavanaugh is a common reaction to last week’s hearing among Republican women in Chatham and the surrounding towns in a conservative-leaning section of northern New Jersey that has emerged as a key battleground in this year’s US midterm elections.

While several women said they believed something had happened 36 years ago to Christine Blasey Ford, Kavanaugh’s accuser, they were not sure just what – only that it did not rise to the level of rape. At the same time, they seemed convinced that a man with an impeccable record had been wronged, and that the men in their own lives might also be at risk.

Trump played on that fear at a rally in Mississippi on Tuesday night, in which he mocked Blasey Ford’s claims and warned that innocent men were in danger of being destroyed by unfounded accusations by women.

“You know what women are thinking? ‘This could be my son. This could be my husband’,” said Karen Arakelian, a Trump supporter who has owned a furniture store in nearby Fairfield for nearly 40 years. The Kavanaugh hearing, she believes, was mostly an attempt by a flailing opposition to discredit a successful president.

“If it were me – I’m Sicilian – I would have been hitting people,” Arakelian said of Kavanaugh’s angry performance before the Senate judiciary committee. “What they did to him was criminal.”

Such sentiments are a reminder of the perils of drawing easy conclusions about gender and politics from one of the most charged events of a polarising presidency.

For Democrats, in particular, they signal the potential pitfalls of relying on women’s anger in the age of Trump and “MeToo” to win control of the House of Representatives and Senate in next month’s election.

To achieve that goal, New Jersey’s 11th congressional district is a prime target. With Morris County as its heart, it has long been a conservative bastion, featuring towns like Chatham that pair million-dollar-plus homes with quaint main streets, picket fences and other dashes of Americana.

With Republican incumbent Rodney Frelinghuysen stepping down from the House, the Democrats’ hopes have been bolstered by the arrival of a star candidate, Mikie Sherrill, who – on paper, at least – is a modern-day political consultant’s dream: an ex-Navy helicopter pilot, former prosecutor and photogenic mother of four.

Even before Blasey Ford’s testimony last week, the contest was shaded by gender. Sherrill has accused her Republican opponent, Jay Webber, a state legislator, of supporting a socially conservative agenda that is anti-woman.

In particular, she has targeted Webber’s opposition to an equal pay law that his supporters argue would punish small businesses and mostly benefit trial lawyers.

When it comes to Kavanaugh, the political calculations may be complicated. Polls taken this week have shown varied results in terms of the hearing’s impact on voters. One of the most recent, conducted by Fairleigh Dickinson University, claimed that 53 per cent of New Jersey’s likely voters now oppose the judge’s confirmation.

Yet it may be dangerous for Democrats to believe that women voters will carry them to victory, according to Kelly Dittmar, a political scientist at Rutgers University’s Center for American Women and Politics.

Dittmar pointed to recent research conducted by Erin Cassese and Tiffany Barnes, political scientists at the University of Delaware and University of Kentucky, respectively, showing that Republican women are much closer to Republican men in their attitudes about gender issues – particularly sexism – than they are to Democratic women.

While Republican women worry about sexual assault, for example, many also worry about the danger of it being unfairly “weaponised” by their political opponents. Hence, attacks on Kavanaugh might energise some women but risk alienating others that Sherrill needs to win.

“Any candidate in a purple district has to be aware of how this will play with both Democratic and Republican voters and weigh the risk of how they want to use it,” Dittmar said of the Kavanaugh hearing.

Swartz is a walking reminder of the many varieties of feminism. She graduated from Bowdoin College in Maine in 1982 – the same year Blasey Ford claims to have been assaulted as a teenager by a drunken Kavanaugh – and went to work on male-dominated Wall Street.

“I was raised one of three girls by a dad who thought we could do just anything,” Swartz recalled.

She is a nickel-and-dime fiscal conservative, who worries how the local government will pay for services after devoting most of its budget to maintaining Chatham’s schools. She was not immediately drawn to Trump but has come to embrace him - particularly for his handling of the economy. “How can you argue with that?” she asked, noting the shrivelling unemployment rate and soaring stock market.

As a self-described “dyed-in-the-wool Catholic”, Swartz was willing to look past Trump’s alleged mistreatment of women and sexual peccadilloes, which she views as distasteful but hardly worse than those of former president Bill Clinton – or even John Kennedy. “You can’t choose your outrage,” Swartz said.

A young woman who attended the same university as her 27-year-old daughter – as evidenced by her sweatshirt – was sitting nearby at the local Starbucks, and was asked about the Kavanaugh hearing. She had not paid attention. Her friend, also a recent graduate, said she felt sympathy for Blasey Ford until she heard that a “body language expert” had debunked much of the testimony.

Swartz’s own daughter, who has followed her mother into finance, agreed with her, saying the accusations against Kavanaugh simply did not add up.

“She went to a party school. She’s seen it all,” Swartz said. “She understands that women have a lot of control. Smart women make smart decisions.” – Copyright The Financial Times Limited 2018