Trump says Ivanka would be ‘dynamite’ as US ambassador to UN 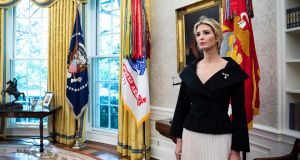 Ivanka Trump looks on as President Donald Trump and Nikki Haley announce Ms Haley’s resignation as US ambassador to the UN at the White House on Tuesday. Photograph: Samuel Corum/New York Times

US president Donald Trump has said he is considering five candidates to take over from UN ambassador Nikki Haley after she announced her resignation.

Ms Haley is leaving her post later this year in the latest shake-up to Mr Trump’s turbulent administration, raising questions about who will fill the key national security post and about the outspoken diplomat’s own political ambitions.

Mr Trump later told reporters that a successor would be named in two to three weeks – or maybe sooner. Among those under consideration, he said, was former deputy national security adviser Dina Powell.

The news of Ms Haley’s departure blindsided some key US allies and many congressional Republicans involved in foreign policy matters.

And it came less than a month before congressional elections, thwarting White House efforts to project an image of stability, with the loss of one of the highest-profile women in the administration at a time when women’s votes are being vigorously pursued.

It is an honor to serve in the White House alongside so many great colleagues and I know that the President will nominate a formidable replacement for Ambassador Haley. That replacement will not be me.

But Ms Haley, the first female governor of South Carolina, has often been an unpredictable and independent force in the Trump administration. At times she has offered strikingly different perspectives on world events from her more isolationist-minded boss.

A smiling Ms Haley announced her decision at an Oval Office meeting alongside the president, bringing up her own political prospects even as she underscored her continued support for Mr Trump.

Without prompting from reporters, she said she had no plans to run for president “in 2020” and would campaign for Mr Trump.

The president told reporters he had heard Ivanka’s name discussed for the post, adding that she would be “incredible”, but said if he selected her he would be accused of nepotism.

“I’ve heard Ivanka, I’ve heard ‘how good would Ivanka be?’ The people that know – it’s nothing to do with nepotism – but I want to tell you the people that know, know that Ivanka would be dynamite. But then I’d be accused of nepotism if you can believe it, right?”, he said.

Mr Trump added that he was not sure there was “anybody more competent in the world” for the job than his daughter.

In a tweet, however, Ivanka Trump – a senior adviser to the president – said Mr Trump would “nominate a formidable replacement for ambassador”, adding: “That replacement will not be me.”

US ambassador to Germany Richard Grenell’s name has also been floated for the post, but Mr Trump suggested he would rather keep him in his current post “because he’s doing such a good job”.

Ms Haley (46), hinted in her resignation letter to Mr Trump that she was headed to the private sector.

“I have given everything I’ve got these last eight years,” she said, referring to her six years as governor as well as her time at the UN. “And I do think it’s good to rotate in other people who can put that same energy and power into it.”

Ms Haley was appointed to the UN post in November 2016 and last month co-ordinated Mr Trump’s second trip to the United Nations, including his first time chairing the Security Council. – AP