The Irish Times view on the US supreme court: falling to new depths 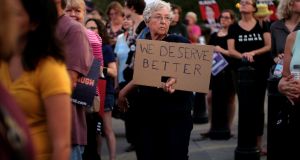 Charlotte Peterson of Woodbridge, Virginia demonstrates outside the US supreme court during a vigil in opposition to supreme court nominee Brett Kavanaugh in Washington on Wednesday. Photograph: James Lawler Duggan/Reuters

The suggestion by Chuck Grassley, chairman of the US Senate judiciary committee, that the supplemental FBI investigation into supreme court nominee Brett Kavanaugh has found “no hint of misconduct” signals that the Trump White House intends to proceed with the judge’s nomination. That’s bad news for the the supreme court, Congress and American society at large.

The FBI was asked to investigate last week after testimony given to the committee by Christine Blasey Ford, a university lecturer who says Kavanaugh sexually assaulted her in 1982, when they were teenagers. Two other women have also made allegations about Kavanaugh’s past conduct. Kavanaugh has strenuously denied all the allegations against him.

Attention has focused on Blasey Ford’s claims, which she outlined in a poised and consistent account to the committee last week. The Republican majority on the committee has argued the truth of the disputed incident cannot be established, and that Kavanaugh’s guilt has not been established beyond a reasonable doubt.

That may be true, but it’s also to miss the point. The current debate is not about Kavanaugh’s legal responsibility. For a man who is about to be appointed to a lifelong post on America’s most powerful court, the standard is higher than the legal presumption of innocence. Moreover, misgivings about his nomination are as much about his response to those allegations as the allegations themselves.

In his appearance before the committee last week, Kavanaugh disqualified himself. His bitterly partisan diatribes, his uncontrolled aggression, his inability to keep his anger in check all suggested a total absence of judicial temperament. For the Republican Party to persist with his confirmation, knowing the signal it sends to wider society, and to women in particular, is a sign of the depths to which the party has fallen. Kavanaugh should withdraw his name. If he does not, those Republican senators who still possess a moral compass must stand up.