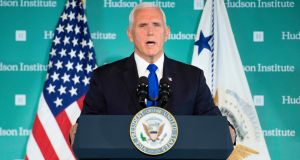 China has accused US vice-president Mike Pence of making slanderous, baseless accusations after he said Beijing was trying to sway the US midterm elections for its own political ends.

“The relevant speech made unwarranted accusations against China’s domestic and foreign policies and slandered China by claiming that China meddles in US internal affairs and elections. This is nothing but speaking on hearsay evidence, confusing right and wrong and creating something out of thin air,” foreign ministry spokeswoman Hua Chunying said in a statement.

“It is very ridiculous for the US side to stigmatise its normal exchanges and cooperation with China as China interfering in its internal affairs and elections,” she said.

Mr Pence’s wide-ranging speech at the Hudson Institute in Washington DC contained the Trump administration’s most hawkish comments yet on China, including references to disputes over trade, Taiwan, freedom of the seas, human rights and cyberterrorism.

The world’s two largest economies are currently locked in a trade war that has seen US president Donald Trump impose $250 billion (€217bn) in tariffs on Chinese goods and China levy $60 billion of its own tariffs on US goods in response.

Military tensions have also ratcheted up after a US destroyer was forced off course by a Chinese warship during a patrol in the South China Sea, narrowly avoiding a collision. A number of high-level military meetings have been cancelled.

Beijing was using “covert actors, front groups, and propaganda outlets” to change American perceptions of the Chinese government, he said.

“We are committed to joining hands with the US to work for non-conflict, non-confrontation, mutual respect and win-win co-operation. We urge the US to correct its wrongdoing, stop groundlessly accusing and slandering China and harming China’s interests and China-US ties, and take concrete actions to maintain the sound and steady development of China-US relations,” she said.

In his speech, Mr Pence referred to the incident where a Chinese naval vessel came within 40 metres of the bow of the USS Decatur as it carried out a freedom-of-navigation operation in the South China Sea, most of which is claimed by China.

He said the US Navy would continue to fly, sail and operate wherever international law allows and where American national interests demanded.

The Chinese side countered by saying the country’s intentions were peaceful.

“China is always the builder of world peace, contributor to world development and defender of the international order,” Ms Hua said.

Mr Pence’s speech comes shortly before secretary of state Mike Pompeo is expected in Beijing to discuss ways of getting the North Korean diplomatic process back on track. The US is hoping for Chinese co-operation in bringing about the denuclearisation of the Korean Peninsula.