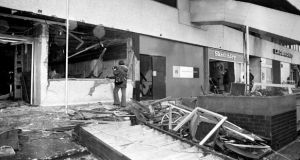 The aftermath of the fatal bomb attack on the Mulberry Bush pub in Birmingham. File photograph: PA

A man has been arrested in connection with the murders of 21 people in the 1974 pub bombings in Birmingham.

The arrest comes just days before the 46th anniversary of the two November 21st blasts at the Mulberry Bush and Tavern in the Town pubs.

West Midlands Police said officers from the West Midlands counter terrorism unit, working with colleagues from the Police Service of Northern Ireland (PSNI), arrested a 65-year-old man at his home in Belfast on Wednesday.

The man was arrested under the Terrorism Act and a search of his home is being carried out.

The force said he would be interviewed under caution at a police station in Northern Ireland.

It comes just a month after British home secretary Priti Patel said she would consider holding a public inquiry into the bombings.

Responding to news of the arrest Ms Hambleton called it “the most monumental event” in the criminal investigation into the bombings since the quashing of the convictions of the Birmingham Six in 1991.

When she was telephoned by a senior West Midlands Police officer with news of the arrest on Wednesday, she told of how she broke down in tears.

“I couldn’t speak, I was just inconsolable and was just looking at the picture of Maxine,” she said.

Ms Hambleton, who is part of campaign group Justice for the 21, said: “It’s something we have been waiting a long time for.

“Having this development — whatever happens — does not in any way lessen our desire for a full public inquiry to be held.

“There are wider issues which need to be examined and so much that went wrong, like why six men were arrested for a crime they didn’t commit.”

Ms Hambleton added: “The fact is we have had to beg and campaign and give up our lives as we knew them to fight for justice.

“Justice that was never facilitated by the authorities whose job it was to do so.

“How was it that for so long, after 21 people were blown up and more than 200 other innocent souls were injured, nobody was looking for the perpetrators?”

James Craig, known as Jimmy, was among those fatally injured in the bombings, with the factory worker and former Birmingham City FC trialist dying of his wounds on December 9 1974.

“It is, however, just a step and it does not detract from the fact that we need a public inquiry.”

In April last year, an inquest jury found a botched IRA warning call led to the deaths of 21 people unlawfully killed in the bombings.

The two bombs planted in the two pubs also injured up to 220 other victims.

A flawed investigation by West Midlands Police led to the wrongful convictions of the Birmingham Six — one of the worst miscarriages of justice in British legal history. – PA