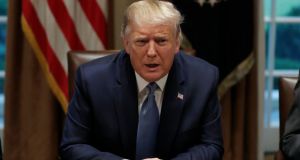 US president Donald Trump has been accused of criminal and civil bribery in a House of Representatives judiciary committee report. Photograph: Evan Vucci/AP Photo

Democrats accused US president Donald Trump of “multiple federal crimes” on Monday as the US House of Representatives prepares to hold a historic vote on impeachment this week.

A report issued by the House judiciary committee on Monday said that Mr Trump’s dealings with Ukraine constituted both criminal and civil bribery.

Noting that Mr Trump was being charged with two articles of impeachment – abuse of power and obstruction of Congress – it said that “while there is no need for a crime to be proven in order for impeachment to be warranted... President Trump’s scheme or course of conduct also encompassed other offenses, both constitutional and criminal in character, and it is appropriate for the Committee to recognize such offenses in assessing the question of impeachment.”

The report was published ahead of Wednesday’s expected impeachment vote in the House of Representatives, only the third time in history a sitting US president has faced such vote.

Democrats have argued that Mr Trump’s dealings with Ukraine – in particular a July 25th phone call between the US president and Ukrainian president Volodymyr Zelenskiy, during which Mr Trump sought an investigation of his Democratic rival, Joe Biden – constitute impeachable offences, and they have been leading the inquiry, which began in September.

The rules committee will meet on Tuesday to draw up the parameters of the vote, which is expected to take place on Wednesday.

With Democrats holding 233 of the 435 seats in the House of Representatives, the vote is likely to pass. But there are expected to be some defections among the more than a dozen or so Democrats who represent Trump-friendly districts.

In a boost for House speaker Nancy Pelosi, Elissa Slotkin, who represents a Michigan district that is expected to be closely contested in 2020, announced on Monday that she would be voting in favour of the two articles of impeachment. Ms Slotkin had indicated her opposition to impeachment earlier in the year.

But recently-elected New Jersey Democrat Jeff Van Drew indicated that he will switch his allegiance to the Republican party later this week, after he met with Mr Trump at the White House on Friday.

Mr Van Drew had been one of the most vocal Democratic opponents of impeachment. Along with Minnesota representative Collin Peterson, he voted against the procedure to move forward with impeachment in October. Mr Peterson is expected to vote against the two articles of impeachment this week.

Meanwhile Chuck Schumer, the top Democrat in the Senate, wrote to the top Republican, Mitch McConnell, on Sunday setting out Democratic priorities if the impeachment process moves to the Senate as expected.

Mr McConnell is unlikely to accede to Democrats’ demands, but is expected to liaise with them about the scope and length of any impeachment trial, amid reports that he favours a swift trial in the upper house.