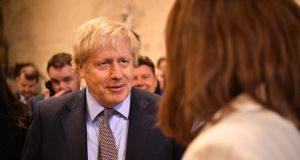 British prime minister Boris Johnson greets newly-elected Conservative MPs at the Houses of Parliament in London. The new MPs will be sworn in on Tuesday. Photograph: Leon Neal/Getty

Boris Johnson has welcomed 109 new Conservative MPs to Westminster, telling them they must deliver on the “sacred trust” of voters as they prepare to vote on his Brexit deal later this week. Downing Street confirmed on Monday that the Withdrawal Agreement Bill would be put to its second reading in the House of Commons on Friday, completing the rest of its stages in January.

Mr Johnson completed a mini-reshuffle of his cabinet on Monday, appointing Simon Hart as Welsh secretary and retaining Nicky Morgan as culture secretary despite the fact that she is no longer an MP. Ms Morgan, who did not contest last week’s general election, will go to the House of Lords and is expected to remain a minister for a few weeks until the prime minister effects a comprehensive reshaping of his cabinet in February.

“Well it turns out that leaving the Cabinet is harder than leaving the EU,” Ms Morgan said on Twitter.

Mr Johnson’s official spokesman declined to say if the Withdrawal Agreement Bill would be in the same form as before the election, amid speculation that commitments to maintain protections for the environment and employment rights could be dropped.

“You will have to wait for it to be published but it will reflect the agreement that we made with the EU on our withdrawal,” the spokesman said.

Jeremy Corbyn is expected to face recriminations from Labour MPs at a parliamentary party meeting on Tuesday after the party’s worst general election result since 1935. Labour will start the process of choosing a new leader in January in a contest that will continue until March, with the party membership having the final say.

Shadow business secretary Rebecca Long-Bailey has emerged as an early frontrunner amid reports that shadow education secretary Angela Rayner could run on a joint ticket for deputy leader. The two women, who are close friends, have been loyal to Mr Corbyn and could win the support of his allies on the left of the party and in the trade union movement.

Shadow treasury minister Clive Lewis said on Monday that he is considering a run for the leadership and Wigan MP Lisa Nandy has also suggested that she will be a candidate. Other likely contenders include shadow Brexit secretary Keir Starmer and backbencher Jess Philips, who has been critical of Mr Corbyn’s leadership.

Mr Corbyn claimed at the weekend that although Labour lost the election, it won the argument on policy – an assertion rubbished on Monday by London mayor Sadiq Khan.

“It is ludicrous to say we won the argument at this election – because we lost. No amount of spin can even begin to deflect from the disaster of losing the fourth election in a row following a decade of damaging austerity by the governing party,” he said.

Shadow foreign secretary Emily Thornberry on Monday threatened legal action against former Labour MP Caroline Flint, who claimed she once told a fellow MP from a Leave-voting seat that she was “glad my constituents aren’t as stupid as yours”.

“As long as it’s true, I take it on the chin. But they can’t make up shit about me and if they do, I have to take it to the courts,” Ms Thornberry said.