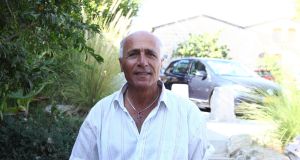 Israeli former nuclear technician Mordechai Vanunu: In 2004 he completed an 18-year sentence, most of which was spent in solitary confinement. Photograph: Dan Porges/Getty Images

Israel’s high court has rejected a petition from Mordechai Vanunu, the man who revealed the country’s nuclear secrets to the world in 1986, to be permitted to leave the country.

The justices ruled that based on the material shown them, Mr Vanunu possessed secret and sensitive information that he had not revealed and that if he did, this would be dangerous for state security. They also ruled that they had been persuaded that the nuclear whistleblower wished to reveal his information.

At the same time, they urged the state to continue to try to find ways to ease Mr Vanunu’s conditions in Israel.

For years Mr Vanunu has demanded that Israel rescind his citizenship and allow him to leave the country.

Mr Vanunu, a low-level technician at Israel’s Dimona nuclear plant, first hit the headlines in 1986 when he leaked details with photographs he took surreptitiously to the British Sunday Times.

The revelations marked the first concrete proof that Israel had the capacity to manufacture nuclear bombs.

Israel maintains a policy of “nuclear ambiguity”, neither confirming nor denying foreign reports of its nuclear potential. It has refused to sign the nuclear Non-Proliferation Treaty or to allow international surveillance of its Dimona plant in the southern Negev desert.

Partly based on the secrets Mr Vanunu revealed, foreign experts have concluded that Israel is the world’s sixth-largest nuclear power.

Israel was determined to prosecute Mr Vanunu for leaking the classified secrets but was reluctant to seize him in Britain, fearing that such an action would jeopardise relations with the friendly Margaret Thatcher government.

Instead, the Mossad carried out a “honey trap” operation and sent a female agent to lure Mr Vanunu from London to Rome, from where he was kidnapped and taken back to Israel. He was convicted of treason and espionage in 1988.

Mr Vanunu converted to Christianity in 1986 and married theology professor Kristin Joachimsen in Jerusalem in 2015 after first meeting her in Israel almost a decade earlier. In 2017 Norway offered to let Mr Vanunu live in Oslo with his Norwegian wife, but the Israeli authorities refused.

Mr Vanunu promised to take the first flight out of Israel to any country willing to have him. He said he had no more nuclear secrets to reveal that could potentially damage Israeli security.

In 2004 he completed an 18-year sentence, most of which was spent in solitary confinement. However, strict conditions were attached to his release, including a ban on leaving the country, a ban on entering the Palestinian territories and a ban on meeting foreign journalists.

Since his release, Mr Vanunu has twice served jail terms after convictions for parole violations.