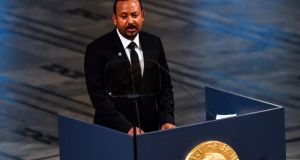 Ethiopian prime minister Abiy Ahmed has been awarded the Nobel Peace Prize in Oslo, where he was recognised for his work in bringing an end to conflict between Ethiopia and neighbouring Eritrea, along with domestic reforms.

In a 20-minute speech, the 43 year old said he was accepting the award on behalf of Ethiopians and Eritreans, “especially those who made the ultimate sacrifice in the cause of peace”.

“Likewise, I accept this award on behalf of my partner, and comrade-in-peace, President Isaias Afwerki [of Eritrea].”

Mr Abiy came to power in April 2018 and quickly began implementing reforms. He lifted a state of emergency in Ethiopia that began after protests by members of the Oromo ethnic group were met with gunfire by security forces. He announced that thousands of political prisoners would be given amnesty, and pledged to hold elections that would be truly democratic.

However, his relationship with Eritrea has been questioned by Eritreans, many of whom say things have not improved, despite a declaration that the war has ended. They argue that Mr Abiy is whitewashing the crimes of a dictator, Mr Afwerki, who still controls a country with no freedom of speech and mandatory, unending, national service for every citizen.

Several hundred Eritrean protesters took to the streets in Oslo, ahead of the ceremony. “Nobel Prize is for concrete peace, not rhetoric,” read one sign carried by a protester, as reported by the BBC.

Ethiopians who spoke to The Irish Times said they felt proud but also worried that Mr Abiy’s Nobel win could be used by others in government to exacerbate tribalism. “His government may use the award to influence the politics at home,” said Abel Wabella, a journalist and blogger who was imprisoned under the previous Ethiopian leadership.

“Abiy is trying to keep the segregational ethnic federal system he has inherited from the previous government with little cosmetic surgery. That is my primary concern,” said Wabella, who added that the peace deal with Eritrea had not been completely successful, but Mr Abiy “has done what he can do”.

He said the process had not gone further because of the “arrogance” of Mr Afwerki, who has ruled Eritrea since its independence was recognised in 1993.

Mr Abiy, a former army intelligence officer, also came under fire for refusing to do a press conference or take questions from journalists in Oslo, despite press freedom being one of the causes he says he supports.

There have been 12 African winners of the Nobel Peace Price, including Desmond Tutu, who won in 1984; anti-apartheid leader Nelson Mandela, in 1993; then UN secretary general Kofi Annan, from Ghana, in 2001; Liberia’s president Ellen Johnson Sirleaf and activist Leymah Gbowee in 2011; and Congolese gynaecologist Denis Mukwege, who shared the prize last year for his work with victims of sexual violence.