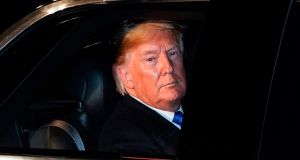 The impeachment inquiry into President Donald Trump has entered a critical phase with the publication of a 300-page report by the House intelligence committee. The report, which outlines the committee’s conclusions after weeks of private and public depositions and information-gathering, effectively sets out the grounds for impeachment.

It alleges that Mr Trump used the powers of his office “to solicit foreign interference on his behalf in the 2020 election” by asking the Ukrainian president Volodymyr Zelensky to investigate former vice-president Joe Biden and to examine alleged Ukrainian interference in the 2016 election.

Concluding that Mr Trump “placed his own personal and political interests above the national interests of the United States”, the report argues that the president undermined national security “in favour of two politically motivated investigations that would help his presidential re-election campaign”.

While the lengthy document recounts much of the evidence the committee gathered from witnesses – such as the effort to remove former ambassador to Ukraine Marie Yovanovitch and concerns raised by the White House’s chief Ukraine expert Alexander Vindman – it also contains previously undisclosed information. In particular, the report includes a log of phone calls between Rudy Giuliani, the president’s personal lawyer, and the White House throughout 2019. In some instances, Mr Giuliani then spoke to Lev Parnas, one of two individuals indicted for illicit campaign finance activities involving Ukraine.

Further, Devin Nunes, the top Republican on the intelligence committee, is shown to have been in telephone contact with Mr Giuliani and Mr Parnas – information that may be highly damaging to the California Republican who has been a strong defender of Mr Trump.

Speaking at a press conference to mark the release of the report, which was published on the eve of Wednesday’s hearing by the House judiciary committee, chairman Adam Schiff said that it proved Mr Trump is a “corrupt” individual who coerced an ally “into doing the president’s dirty work”.

“I am gravely concerned that if we merely accept this . . . we invite it of the next president. I am keenly aware of the precedent we set,” he said.

The report, which was due to be voted on by the House intelligence committee on Tuesday evening, will now pass to the judiciary committee for consideration. That committee – which is tasked with drawing up articles of impeachment – holds its first public hearing on Wednesday.

Four academics, three chosen by Democrats, one by Republicans, will be questioned by lawmakers on the constitutional and legal issues surrounding impeachment.

Given the nature of the subject matter, Wednesday’s hearings are unlikely to pack the same punch as last month’s televised events during which first-hand witnesses described in detail the emergence of a shadow foreign policy on Ukraine orchestrated by the president.

Nonetheless, the hearings mark an important moment, given the centrality of the judiciary committee to the impeachment process. While the house intelligence report may form the basis for articles of impeachment, the committee is also free to add its own information. One question occupying Democrats is whether evidence gathered during the Mueller investigation into Russian election interference should be included in an impeachment inquiry that has so far been limited to Mr Trump’s dealing with Ukraine.

Focus will also be on how committee chairman Jerry Nadler conducts the hearings. A long-time critic of his fellow New Yorker, Donald Trump, the 72 year-old was criticised for his handling of a hearing with former Trump campaign manager Corey Lewandowski in September who successfully stonewalled the committee. This experience is said to have prompted House Speaker Nancy Pelosi to catapult Mr Schiff to a leading role in the impeachment inquiry, presiding over the first set of hearings.

However Wednesday unfolds, what is clear is that the impeachment process is continuing apace. As Democrats continue their investigation of Mr Trump’s activities in Ukraine the prospect of a full House of Representatives vote on impeaching the 45th president of the United States is moving ever closer.